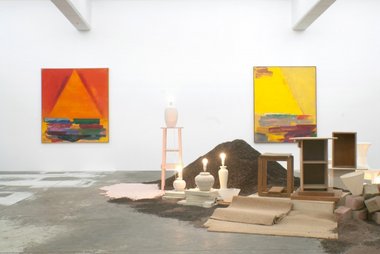 One wonders what would have happened if Armstrong had instead selected Albrecht's sculpture to accompany say, her taped up collages, or had played a demanding Rauschenberg to Albrecht's de Kooning and coolly asked for a really good work she could physically add to or subtract from. That would have been really risky.

In this unusual project - initiated by Michael Lett - Eve Armstrong, a much younger artist, has gone through well known painter Gretchen Albrecht’s archives and selected paintings to provide a setting for her own improvised sculpture of recycled objects. The earliest Albrecht work is from 1976, two years before Armstrong’s birth.

The two approaches work well in a show that puns on ‘arrangements’ as social procedure as well as art composition. There is generosity and trust on both sides because art making can often be, after all, a ferociously competitive occupation. Yet against expectations (because of its ubiquity and normally shimmering colour) Albrecht’s work here looks surprisingly raw and fresh, and Armstrong’s in contrast, slightly sweet and too controlled - despite its use of piled up crushed scoria, dangling light leads, scattered chips and gib board off-cuts.

Armstrong has a good eye for the gritty and adventurously lopsided aspects of Albrecht’s mark-making, picking works that vary in tone, chroma, and compositional approach so that collectively they have a lot of oomph, but for all the considerable inventiveness of form within her own stacked sculpture, her colour sense is comparatively limited - deliberately restricted towards pinks and pastel browns. Despite her use of clean and non-sticky detritus such as stacks of newsprint, spread out tiles and paving slabs, her work looks surprisingly delicate - maybe too much so. This is odd because Armstrong’s sculpture often vacillates between looking like it is mindlessly dumped and looking tastefully arranged, even though it overall is clearly the latter. Her chosen palette seems to be a conscious attempt to stay well clear of Albrecht’s use of intensely lyrical saturation.

For the visitor this visually rich exhibition has lots of lush detail to zero in on, and plenty of clever formal juxtapositions involving peculiar materials - in the manner of someone like Jessica Stockholder. Nevertheless one wonders what would have happened if Armstrong had instead selected Albrecht’s sculpture to accompany say, her taped up collages, or had played a demanding Rauschenberg to Albrecht’s de Kooning and coolly asked for a really good work she could physically add to or subtract from. That would have been really risky in terms of a possible social gaffe or damage to the art. Breathtakingly so.

Next to Lett’s office is a small back room where on two walls Albrecht presents a set of ten collages, drawn and cut images - a bit like some of John Reynolds’ - made for publication in the catalogue that goes with this show. The set is hung with Armstrong’s single work positioned against the opposite wall. The collages work best this way, seen directly as framed works on paper, uncropped with scrawled annotations, and unprinted.

This part of the show has a different mood because of the comparative intimacy of its space and the vertical vectors of the Armstrong work that play against the consistent horizontal level of Albrecht’s marks. You can see Albrecht’s mind ticking over as she experiments with rows of oilstik lines and strips of photographic texture.

In one of the two more visible front rooms the airy lines of Armstrong’s suspended lampshades respond to the density of Albrecht’s sweeping squeegeed curves and columns of splattery flicks and wipes; while the other has Albrecht’s spreading cloud and triangular mountain forms competing with Armstrong’s granular, ceramic and translucent mini-landscapes heaped up from the floor. Though to some degree playing it safe by not sharing some works, this collaboration is still a wonderful celebration of looking at (and moving through) orchestrations of evocative colour, form and texture, if only for the sake of having a body and understanding its pleasures.