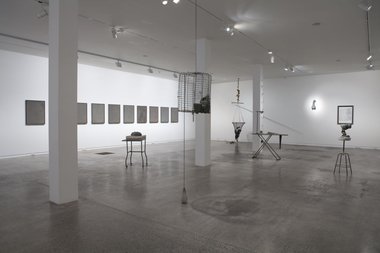 Morison's oozy porridgelike concoction looks like liquid fabric with its rough netlike texture and sludgy, lumpy consistency. Silt here seems to have squirted out of the angry ground to hotly merge with splintering plastic extrusions, ending up wrapped around what seem like abandoned props for some recently filmed science fiction fantasy.

Julia Morison
Meet Me on the Other Side

In 2006 Christchurch Art Gallery and Dunedin Public Art Gallery organised a major, very popular survey of the work of Cantabrian Julia Morison, but inexplicably that magnificent presentation was never extended to include any North Island venues. Although she has had several exhibitions in Auckland and Wellington since, none of those shows have successfully hinted at the complex imaginative and technical leaps that the ambitious retrospective achieved. However, though this Two Rooms display is a dealer gallery exhibition of very recent work (she has been working since the early seventies), it does give Aucklanders a good sense of her graphic sensibility (even in sculpture), plus her formal and conceptual inventiveness.

Morison is known as a resourceful painter - and indeed the paintings in the Liqueurfaction series here, made of earthquake liquefaction and liqueur (initially spilt from shattered bottles), are remarkable for their velvety texture and restrained but colourful variations of grey. Yet this is mostly a sculpture show, spontaneously made from detritus taken off her studio floor and incorporated with unusual objects she has scavenged or been given, thrown into a corner of her studio and then later rediscovered. There are also some prints she has made with Muka.

The surprising thing is that although she has placed about forty works in the downstairs Two Rooms gallery, there is no sense of clutter or frantic jamming. It is a typically elegant and fastidiously positioned Morison hang, and although she became known in the eighties for her vocabulary of geometric modernist logos (made with pointedly symbolic materials) mixed with arcane systems like alchemy and cabbalism, this work, like that of two or three earlier shows, is decidedly surrealist.

Much of that atmosphere comes from various cages, ironing boards, tools and nets, their dripping chains and dangling rubber tubes placed alongside flowing, splintery extrusions made from recycled shopping bags and liquefaction grit that is also mixed with cement and resin. Giacometti, Cornell, Bourgeois, Driver and Duchamp readily spring to mind.

Although Morison has worked with sticky, crunchy and tactile substances like ‘space invader’ foam before, this exhibition seems particularly raw, its hardened, oozy viscosity celebrating the folding expressive qualities of gritty grey sludge or suggestive slimy eel-creatures from Alien or Eraserhead.

Meet Me On The Other Side is richly cohesive as a collection of forms, the prints often repeating aspects of the sculpture which in turn extends the richly worked surfaces and finger daubed smears of the painting. Some sculptures are suspended from the ceiling so your eye takes them in through a wide vertical sweep; others are small, compressed, and grid-based, requiring more intimacy because of the confined scope of their detail.

Before she went to Ilam in the early seventies and studied painting, Morison did a graphic design course with John Drawbridge at Wellington Polytechnic, and even now this sensibility is obvious with its linearity, instinctive tonal control and chromatic restraint, even in large sculptures. They are like large ink drawings in space.

Morison’s use of hoarded earthquake sludge with other more conventional materials is shrewd, her oozy porridgelike concoction looking like liquid fabric with its rough netlike texture and sludgy, lumpy consistency. Grey silt here seems to have squirted out of the angry ground to hotly merge with spiky plastic extrusions, ending up wrapped around what seem like abandoned props for some recently filmed science fiction fantasy.

A balanced tension results from the two-dimensional works on the walls and the sculpture enclosed within. Both silt paintings and intricately rippling lithographs are effective foils to the hanging webs, squishily disrupted, confining matrixes, and theatrically bizarre assemblages that effortlessly dominate the room. The show also has a striking catalogue essay by Creon Upton, an exquisitely worded short story that floats in parallel motion alongside Morison’s images - darting in short bursts through and around, over and under her visceral, dense, highly evocative forms.