The Joy of Repetition 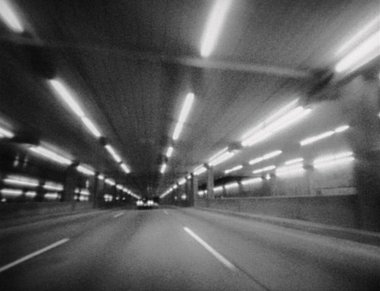 The first prototypes were made in 1965 and so Roehr is often compared to Warhol - but Roehr was interested in how viewer perception changed after repetition, not infatuated with the image itself and its consumerist implications. He was intrigued with how the subject matter (moving traffic on motorways, passing petrol signs, shampoo brands, women’s hairstyles) became more abstract, using short sequences, with stridently assertive voice over or cocktail jazz accompaniment.

Roehr’s fifteen or so works here (he only made 22 in total) are closer to the minimalist music of Riley, Reich and Glass (at times ‘pure’ identical repetition) than the screened imagery of Warhol (‘impure’ - not exact replicas). Within his work the distinctions between the repeated sequences are not in the film but in the mind and awareness of the viewer. It is more the pressure achieved by an accumulation or chronological stacking up of imagery, a gradual accentuation, a growing weight. Believe it or not - despite the images above - it is not so much about narrative content as movement and formal dynamic. In its cutting, much like say Len Lye’s Chrysler Corps based masterpiece Rhythm (1957).

It also fits in with the post-structuralist notion of language speaking through us, the insignificance of the agency of the solitary individual, and the totality of their embeddedness in cultural phenomena such as mass media. The best of these mesmerise due to a tumbling movement that is oddly very satisfying, as with vertical wrestlers toppling backwards while struggling in a clinch, a truck flying over a cliff downwards into the sea, or swirling soapy water going into a plughole. Others are more horizontal or telescopic by nature, drawing you in and then pushing you back without pause, abruptly repeating.

Sometimes it is the advertiser’s language alone that is strangely hypnotic, such as what do you want with McLeans shines manages but never over cleans what do you… Made at a time when Marshal McLuhan’s theories were just beginning to explain how we are physically massaged by the media we attend to (with some of his ideas on electronic tactility repeated by contemporary theorists like W.J.T. Mitchell), Roehr’s films were amazingly prescient - and apt now more than ever in today’s multi-media saturated climate.