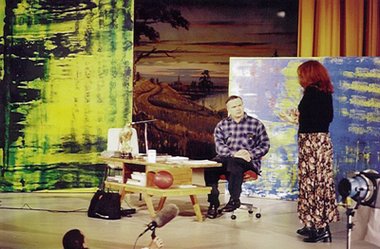 In his own practice Hill is aware of how with the slippery nature of interpretation, ‘obvious' thematic content can quickly crumble. He seems fascinated by the fragility and vulnerability of most viewer assumptions - so some of that surfaces here as well.

Matt Bradley, Matt Dabrowski, Richard Grayson, Michael Stevenson & Danius Kesminas, and Tim Woodward
This is what I do
Curated by Wes Hill

Curated by Queensland artist Wes Hill for the Brisbane Festival 2011 and Metro Arts Galleries Program this exhibition of five moving image works demonstrates this artist/curator’s particular interest in a DIY or self publishing ethos and its parallels with the many methods of today’s contemporary artist. At the same time as he is looking at the popularity of user generated aesthetics, he is also examining pre-self publishing technologies, or pre-digital qualities that today retroactively seem to have acquired something mysterious.

In his own practice Hill is aware of how with the slippery nature of interpretation, ‘obvious’ thematic content can quickly crumble. He seems fascinated by the fragility and vulnerability of most viewer assumptions - so some of that surfaces here as well.

Within Hill’s highly nuanced selection, Tim Woodward’s The Desert of Mortification and Reward presents actor Damien Cassidy talking candidly about his performance in ‘Soldiers of Fortune’, the thirteenth episode of the Australian television series ‘Sea Patrol’. While watching his actions on screen, Cassidy discusses the stress of such extreme roles, the emotional involvement in the fight scenes, and the boredom (‘like watching a sailor do his washing’). He provides a version of his internal monologue, asking himself if it is going to be a success - the experience of being there while attempting to live the story.

On the opposite side of the room, in his New Agey Bri 31 TV show, Fortuna, Matt Dabrowski plays the role of a smart-arse bunnylike clown, a astrological combination of Max Headroom, Bruce Nauman and Kenny Everett - a fluffy, floppy-eared, Quicksilver Messenger from the future. Speaking in openly self referencing, vague but amusing, waffle (‘a foggy phase, a hit or miss communication’ where ‘clarity of mental process becomes elusive’) Dabrowski can also be specific (‘I hope we are not keeping you out of your beds, are we?) accompanied by swirling background psychedelic effects and multiple hydralike versions of his cheeky button-nosed head.

Instead of being a messenger, two videos from Matt Bradley that reference David Hicks show the artist behaving as a conveyor belt / factory robot, raising and lowering his arms and swivelling his torso in regimented, controlled positioning as he picks up various components and assembles and tests an air cannon. He is a brain-washed human automaton rigidly programmed, devoid of personality, constructing a harmless machine that manipulates compressed air to full effect.

Avoiding advanced production technologies, Richard Grayson’s video Ahistoryofreading (1999) plays with the filming and lighting conventions of horror movies, particularly the stealthy movement of cameras as they sneak up on murder victims. Grayson has taken about five dozen books from his library (one being Alberto Manguel’s famous ‘A History of Reading’) and propped them up on the floor so he can advance from a low height towards the dimly lit front covers and knock them over….then to continue straight towards the next ‘victim’. Images and titles are arranged in linking associative sequences with different circuits of books randomly repeated to make an extremely ‘low budget’ and funny conceptual version of film noir narrative.

The last work, instead of using books as actors, uses a magazine for a script. Possibly the most extraordinary work here is Michael Stevenson and Danius Kesminas’ filmed play Daily Practice, based on a long interview legendary German painter Gerhard Richter did with the critic Doris von Drathen. In his studio the two discuss (amongst other things) the connections between painting and reality, the nature of abstraction and pop, is painting necessary and why is it needed? The two actors don’t look anything like the original speakers but the script holds your attention, is energetically speculative and nicely paced.

The five extremely varied works make a nice interconnected group. The agency of the painter, so ably explored by Stevenson and Kesminas, is contrasted with the cybernetic Bradley, and Grayson’s toppling line of unopened books, while the introspective ruminations of Tim Woodward’s actor bounce off the wildly entertaining exhibitionism of Dabrowski. A superbly orchestrated exhibition.