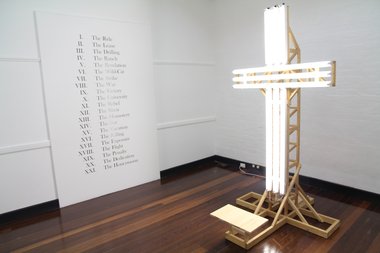 Is there a method to the structure, this scattered array of references to movie and book? Tess Maunder's writing looks at Cranstoun's interest in the representation of history. Her text tends to downplay the clash between novel and film whereas experiencing the show, catalogue and website all together accentuates it.

So four years on from the movie’s premiere, Cranstoun (or perhaps curator Daniel McKewen) uses the space at Boxcopy, to draw out separate aspects of the novel (Anderson only used the first 150 pages) and quite different film.

In the gallery space he shows a screen-printed canvas painting listing the chapter headings of Sinclair’s novel. Nearby in the same room there is a wooden derricklike structure (it might also be an easel, or a gallows with trapdoor - for Day Lewis’ character Plainview becomes a murderer) holding up a fluorescent white cross, the beams of which are three tube thicknesses’ across.

For the catalogue local art writer Tess Maunder has written a contextualising essay about the artist placed alongside two collagelike images - one of Day Lewis’s oil-coated face, his visage covered by a can of Hershey’s chocolate syrup that seems to be pouring into his mouth; the other of a modern plastic bottle of the same syrup lying on a folded grey bedcover. On the Boxcopy website with the entry for this exhibition, there is a second image of the Hershey’s sauce tin hovering over the two fundamentalist Christian brothers (Eli and Paul Sunday) who feature prominently in the film (opposing Day Lewis’ greedy Daniel Plainview character) preaching in church.

So in all this, is there a method to the structure, this scattered array of references to movie and book? Tess Maunder’s writing looks at Cranstoun’s interest in the representation of history, and the problems of attempting to separate fact from fiction. Her text tends to downplay the clash between novel and film whereas experiencing the show, catalogue and website all together accentuates it. The Wikipedia entry on Oil! reveals how different the novel is from the Anderson creation (Plainview is an amalgam of several minor Sinclair characters) so Cranstoun’s painted text invites us specifically to ponder an alternative. Many of its filmgoing readers will be puzzled because it is hard to connect to the film plot. That obviously is intended.

The glowing cross, with its three lines of fluorescent tubing, could be a symbol not just of Christianity but of the tragic impact on men’s lives of oil as destructive beacon, or art itself that people obsess with. The three tubes might represent the three conflicting figures in the film shown linked to the Hershey syrup in Cranstoun’s ‘collages’: Plainview and the two Sundays - but maybe I’m over determining things there.

Normally the canvas of chapter headings would be too uninteresting and dry by itself, but with the intricate wooden derrick/easel/gallows, bright cross and peripheral Photoshopped images referencing the film, Cranstoun has created a richly interwoven mix.

As for the status of the Hershey images? They go with the contextualising essay, and may be working studies initially, but now as part of the show’s hand-out they have the same visibility as the objects in the gallery, becoming a good foil to the austere ‘Sinclair’ canvas, making it all the more baffling. Cranstoun’s sticky viscous simile interacts with thematic ingredients retained within Anderson’s script writing process, reminding us of the film’s final plot far beyond the initial novel - and how fiction generates fiction. 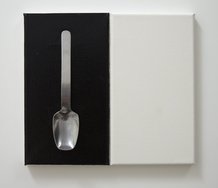