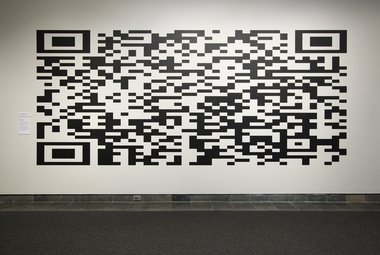 The winner, a work by New Zealand born but now Australia based, Andre Hemer, called 'Blue Poles', references the famous Jackson Pollock work of 1952, housed for some time now in Canberra at the National Gallery. In its formal construction it reminds one of the works of Simon Morris and Gordon Walters, updated for the techno age with its barcode look, which when scanned, provides a hyperlink locating the position of the Pollock piece.

This Hamilton-based award is well known nationally and although Bold Horizon has replaced Trust Waikato, the event as such has a history - some would say a dubious one. Past winners have had media commentators frothing at the mouth, which seems counter-intuitive for an institution hell-bent on catering to mass appeal, though seen from another perspective, it may be regarded as advantageous to be caught up in a media circus, such as Paul Henry going ape over the 2009 winner, Dane Mitchell’s assortment of trash which used the wrappings of other entrants tossed in a pile on a plinth. Nothing like a bun fight to get attention and coverage.

So it was good to see the judge, John Hurrell, Waikato Museum’s last art curator, refusing to buy into that cheap brouhaha and instead go for something more measured but equally erudite and challenging in his selection. What was also refreshing is that he put his cards on the table, being completely upfront with his agenda at the outset. It is well known, among those that know, that Hurrell has a penchant for the conceptual and the abstract and he declared that at the onset, stating his avowal for works that for him generated a “gritty industrial ambience of alienation and urban freneticism”, all of which meant there was no room for pastoral or romantic landscapes. His was a thematic approach rather than a “best of the best” choice. Always the curator.

He even went as far as to point out the different sub-groupings he’d divided the show up into; digital extension of the body; painting as marks; writing as drawing etc. One other criterion he confessed to operating under was that the works be not too “overly prescribed”. I think in the main he achieved that, with perhaps one exception, a very overt political work by Brett Graham, titled, Iwi Slayer, whose pronouncements and programme, captured in a Light box display case, left no one in any doubt about the artist’s predilections regarding the current stoush over the Maungatautari reserve.

The polarisation and value weighting of populist versus the more esoteric was graphically demonstrated in the placement of the show itself inside the building. Level One, originally purpose built and light sensitive for art exhibitions was commandeered by a travelling rugby show while the contemporary award exhibition got bumped to the much smaller and less prestigious Level Two. No surprises there. Hurrell however has managed to use the space judiciously and where possible hung and arranged the work to maximise their visual potential, cleverly juxtaposing pieces to allow them to play off each other in aesthetically satisfying ways. A nice example of this is the large wall abstract (the winning entry) set against the smallest piece in the show, a semi abstract sculpture by Richard H. Mcllroy, made up of tiny blocks to create an image of an elephant on its back balancing a yellow square on its upright legs, unambiguously called, White Elephant and Yellow Cube.

The winner, a work by New Zealand born but now Australia based, Andre Hemer, (coincidentally a former winner was also Aussie based) called Blue Poles, references the famous Jackson Pollock work of 1952, housed for some time now in Canberra at the National Gallery. Art about art is a sure fire bet with contemporary curators who love the double decoding that goes on in such cases and it certainly pressed the judge’s buttons. In its formal construction it reminds one of the work of Simon Morris and further back, that of Gordon Walters, updated for the techno age with its barcode look, which when scanned, according to the artist, provides a hyperlink locating the position of the Pollock piece. Hurrell saw this as “extending the notion of painting”. Others may regard it as a piece of gimmickry, but whatever the case, it presented well. Interestingly the idea of extension stretched to the artist getting a sign-writer to create the work, which paradoxically recalled the above mentioned Mitchell who got the museum staff to construct his piece. Art by proxy.

The self-referential turn was also employed by Noel Ivanoff with an adroit piece of deconstruction entitled Disassembled Crate (Painting #2), which presented an art packing crate cut in half to expose the contents - a line of yellow paint applied in an abstract strip down the inside of the container.

For the rest; it was encouraging to see the inclusion of a least one work that involved fabric, (The Best of Times, The Worst of Times ) a clever little collage on a feminist theme created by a collective calling itself F4 (Susan Jowsey/Marcus Williams), a photograph in the Dadaist tradition incorporating a gentleman’s suit material and stitching thread.

Sculpture was well represented, Art Tribalised, by Jeff Drabble, being a particularly standout piece. The paintings by contrast seemed pallid things, though Woman Approaching Group, by Matthew Carter had an interesting Hopperesque quality, while a charcoal work on paper by Matt Ellwood entitled, Government Health Warning, was exquisitely rendered and possessed a delicious satirical bite.

All in all, a show well curated, worth a second and third look with a deserving winner. What more could one ask.