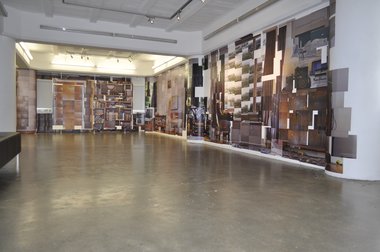 We're becoming accustomed on the internet to being wowed by seamless three dimensional photographs of spaces, intricately sewn together from thousands of images. They're designed to give us a simulacra of experience - just as centuries of new technologies have tried to do. Crowe's work provides a personal, human and physical play off such digital trickery to represent what a real experience is all about.

If I look closely out a photographed window in Vanessa Crowe’s photo-collage installation Makeshift Living I can see trees in my garden and my neighbours’ roofs. In terms of the degrees of separation between artists and critics in New Zealand this is getting ridiculous. Yet, given the concerns of what I found to be a fascinating and complex work, writing about it also feels incredibly apt.

Crowe has ‘decorated’ the walls of Toi Poneke Gallery, floor to ceiling, with a 360-degree patchwork of 600 images of her family lounge and kitchen. In its immediacy and complex handmade personality it immediately reminded me of David Hockney’s photo-collages, that I first saw at the Auckland City Art Gallery back in the mid 1980s.

A Masters from Massey graduate, Crowe is now also a mother of two and homemaker. Her recent works reconcile both sides of her working and making life. Through photographic handiwork and thoughtful installation in gallery sites they re-present the temporal tension between order and disorder in home life and her art practice.

The domestic subject matter is there for both its visual and conceptual interest. It’s also a form of self-portraiture, bringing the artist’s domestic reality into the gallery space. It furthers Crowe’s longstanding interest in the relationships between art and design, and order and chaos in patternmaking. In the home there’s no lack of raw material: the continual cycle of washing and tidying away - of trying to import some semblance of order on the chaos wreaked by the young with their toys and clothes. And, as evidenced by everything from a kid’s drawing board to a 3D jigsaw castle model here, there are also the rich connections to be made between the creative life of the child and that of their artist-parent.

I write from experience. I only spend half of my working week writing and thinking about art. The rest is spent as a father of three and househusband. I share a similar interest in the overlaps between the patternmaking of home and work. A similar concern also, I’m guessing, about how we tidy away the homemaking part of our Curricula Vitae when it comes to presenting ourselves in public.

Not only that, Crowe and I engage in weekly childcare swaps. I know this photographed living area well. On closer inspection I might spot one of my child’s socks.

We’re becoming accustomed on the internet to being wowed by seamless three dimensional photographs of spaces, intricately sewn together from thousands of images. They’re designed to give us a simulacra of experience - just as centuries of new technologies have tried to do. Crowe’s work provides a personal, human and physical play off such digital trickery to represent what a real experience is all about.

Crowe has mapped her own domestic environment by improvising tripods from the objects around her to capture it in its entirety. This shonky makeshiftness sees white slits appear in the prints where the camera has missed spots - as if we can pinpoint gaps in the daily housekeeping regime - and repetitions from patches shot at different angles. When I see a chopping board on the sink here reproduced 13 times I’m reminded of the rhythm of chopping it endures.

Crowe’s work hangs it all out there, like wallpaper. The big white visual pauses in this work, and the endless repetitions of subjects, are charged emotionally with the rhythm of domestic routine and the difficulty of balancing professional and home activity. The picture is patently not homogeneous or ‘visually correct’, it’s fragmented. Life is as hard to hold together and keep working efficiently as making a complete photograph of your living area is.

Crowe’s home is defiantly untidy. It’s a relief from those pretty, ordered domestic spaces we drool over (and ultimately feel punished by) in magazines, newspapers and art. As a homemaker, constantly feeling guilty about the state of my house, I take pleasure in the way Crowe has managed to catalogue every lost beneath-the-drawers marble and crumb. Crowe surely also gets the irony that the time and physical energy she has spent photographing her mess, could have been put to tidying it.

This is the real, political edge to the work. As writer Meryl Richards notes in an accompanying short essay “Crowe, like many women artists before her, has made a conscious decision to use domestic imagery in inform and sustain a vibrant artwork”. Forget the lazy simulacra of Tracey Emin’s bed (the sort of pre-marital mess that leads to this kind of domestic mess), I think particularly of the painting of Jacqueline Fahey.

Crowe also currently has the billboard space outside Bartley and Company Gallery in Ghuznee Street. Here she literally gives her dirty laundry an airing, with a bird’s eye view of her family laundry. As in Makeshift Living the collage is punctuated by floating white geometric spaces. They initially suggest a kind of modernist abstraction, but they ultimately operate as a kind of criticism of modernism. Art that truly reflects the balancing activity of life - Crowe’s work seems to suggest - is far less about some kind of internal harmony than modernism has led us to believe.

A few found elements make Makeshift Living particularly appealing. Firstly, as the images of 2x4 wooden interior wall struts and electrical wires clearly show, Crowe’s house itself is physically in a state of flux. This for a family with young children is not unusual. This neatly echoes that this is a work all about exposing what lies behind the white walls and pieces of paper we prop our lives up with publicly.

Secondly, part of the success of the work is its installation in a room that has been adapted into a gallery space, rather than one that’s purpose built. Crowe ingeniously, actively works with the architecture. As if put into place with the aid of a overhead projector, the photo collage rolls over round pillars, and spills from the space’s white screens onto the walls behind. This creates real three-dimensional nooks and crannies that work in a nice tension with the flatness of the collage. The collage even has to reconcile the presence of white-blinded windows behind these screens - stopping to accommodate them, just as it accommodates pauses in the images that show off its imperfections.

We paper the walls of our houses with regular perfect patterns. These are in conflict with the constant slippages in domestic rhythms they contain. Crowe inverts this situation, putting the disorder onto the walls of the neatly ordered gallery space. In a further twist, the plain walls of Crowe’s living room have become an appealing patchwork quilt of different tones as the light changes between camera frames and changes in position.