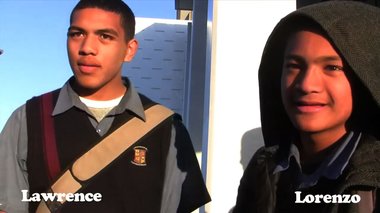 What is distinctive in these beautifully relaxed Q&A sessions is the use of music video clips elegantly woven around them, and the willingness of the subjects to now and then sing songs they love in mid-conversation. The eight or nine topics chatted about range from the pros and cons of Auckland as a Super City to the nature of love, and the virtues of two rival deceased hip hop stars.

Janet Lilo is a Samoan video artist and AUT graduate whose documentary works or productions of other artists have been seen in many venues nationally, such as ARTSPACE (the Fresh component of the New Artists show of 2009) and City Gallery Wellington (within Heather Galbraith’s 2007 Telecom Prospect). Her work has a strong community emphasis (looking at suburban Auckland), yet the affection she has for the twenty or so people being filmed and presented in this new project here on Youtube, brings an added intimacy - its open but almost private, though of course it’s not. It’s community minded in the discreet sense that within this series of seven short programs there are social agendas such as improving collective power - persuading people to exercise their right to vote - but subtly pushed via nuanced implication, not overt instruction.

What is distinctive in these beautifully relaxed Q&A sessions (each one chopped up and spliced in with other answers from others to the same question) is the use of music video (and occasionally cult film) clips elegantly woven around them, and the willingness of the subjects to now and then sing songs they love in mid-conversation. The eight or nine topics chatted about range from the pros and cons of Auckland as a Super City and which country will win the World Cup, to the nature of love, the virtues of two rival deceased hip hop stars (Biggie versus Tupac) and the availability of information about Aotearoa’s political parties.

Lilo’s editing is such that no one person dominates: they talk for a minute or so and then cut to someone else. One gets a sense of the importance of television, film, music and sport in these people’s lives, getting glimpses of the shaping of individual selves not only through family and communities like gangs, but also through the power of mass media, the way entertainment or social environs can mould a subject’s inclinations.

Lilo’s multi-ethnic (but largely Pacific and Maori) interviewees vary from teenage school pupils in uniform to a sweet little old lady in an electric shopping cart. Called The Interface Project, the series references not only the blending of the individual with the technology of mass media but also the pleasurable physiology of face-to-face dialogue; the gregarious pleasures of convivial company. It entertains by using buckets of charm - most people filmed shine in front of the camera. Even the self-effacing and shy impress with their quiet and dignified charisma.

The series works because of its range of social background and personality types - combined with her use of infectious music. The candour and vibrancy of her subjects propels it along, and she controls the pace. And if Lilo has any vehement disagreements (such as say, when someone admits they have been too apathetic or cynical to vote) she keeps them to herself in order to draw the speaker out - to get at their thoughts and possible reasons.

Through these snippets of conversation she seems to see her art as a catalyst for community discussion, a generator of feedback. It allows the group to evaluate itself in terms of the future, to figure out desirable aims and what the best means are to achieve them.

Thanks Janet for pointing that out. Will change the headline.

Thank you John, I appreciate your time in reviewing these works. Just a note that the Interviewees are a mix ...

Thank you John, I appreciate your time in reviewing these works. Just a note that the Interviewees are a mix of participants from Takapuna, Glenfield, Otahuhu, Manukau, New Lynn, Henderson, Glen Innes, Onehunga & Sandringham. J :)

Thanks Janet for pointing that out. Will change the headline.