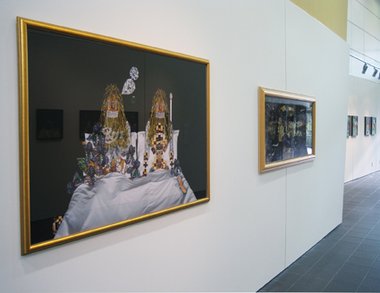 Art has always had one foot dangled in nature. Adam and Eve lost the garden in the beginning while later romantics - Rousseau, Gauguin, die Brucke and co tried to take it back. Another Universe, curated by Karl Chitham, on at the Calder and Lawson Gallery saw half a dozen contemporary artists express their take on the perennial subject.

Nature has been hogging the headlines recently for all the best reasons. The politics of Nature of course gets played out in the media where carbon tax and resource consent has become the commerce of normal parlance, engaging first world angst and muddying the waters of third world aspiration.

Art has always had one foot dangled in nature. Adam and Eve lost the garden in the beginning while later romantics - Rousseau, Gauguin, die Brucke and co tried to take it back. Another Universe, curated by Karl Chitham, on at the Calder and Lawson Gallery (Academy of Performing Arts, Hamilton) saw half a dozen contemporary artists express their take on the perennial subject.

Going for the big picture, Paul Cullen’s installation piece attempted to depict the universe itself. Only two other artists I know of have taken on such an ambitious project - Joan Miro and Len Lye, both resorting to abstraction. Cullen tried a more ‘literal’ yet minimalist approach, presenting a huge inflated white rubber balloon, boxed inside a crate-like structure. Talk of the physics of the curvature of the cosmos was mentioned, but that apart, there was something of the carnival exhibit about the thing (see the freak) for all its industrial aesthetic.

At the other end of the spectrum were Roberta Thornley’s delicate, moody photographs of ordinary, small, even banal objects, like a plastic bottle or a rubber lilo. Set against a black background (recall Christine Webster’s Black Carnival, but softer, using archival pigment ink) these objects, suffused with atmospheric light, took on an ethereal quality; the old trick of de-familiarizing the familiar, with arresting results.

Digital seems to be the word at this show. Several artists availed themselves of the medium, producing technically what appeared like photographic impossibilities, with a surreal edge.

Light relief came in the shape of Jason Hall’s quirky, comic yet lyrical wall sculptures; small black fantails constructed from paper and pieces of painted driftwood complete with sharp pointy noses, fired into the wall like so many darts at a board.

Sara Hughes moved outside the gallery confines to install her work on the windows of the new University library. Brightly coloured adhesive strips, in shapes reminiscent of landscape forms, were attached to the flat glass towering up across the exterior walls three stories high, freefalling in floating clusters. Kandinsky meets Pop meets Alexander Calder.

Futuristic landscapes, digitally manipulated, saw the work of Alex McLeod create a kind of Buckminster Fuller utopia, loaded with hothouse vegetation and quaint eastern origami like constructions. What all of these together amounted to was a displayed tension between the world of technological overreach and environmental disquiet - the old story of Adam and Eve in other words, updated for the twenty-first century.