The Pleasures of Thin Agitated Glazes 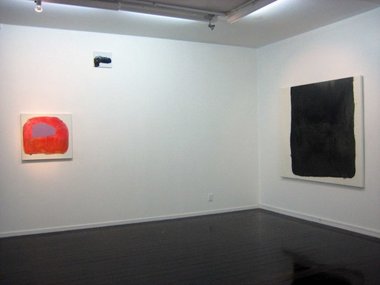 So how would these works be read, for example, if a feminist rhetoric is intended? Is it an oblique reference to, say, the often discussed sacrifices Lee Krasner and Elaine de Kooning made as painters, playing secondary roles and eclipsed by their husbands Pollock and de Kooning?

With her title Day Tripped alluding to the Beatles, and a painting style that comes from the post war developments of the early fifties, particularly lyrical abstraction, Christchurch painter Marie le Lievre’s much glazed, oozy show holds a curious position when seen in Auckland - especially when compared with local products like the cool minimalism of Noel Ivanoff, the ‘thinking’ machinery of Simon Ingram, and the convulsive angular layering of James Cousins.

Her work is openly sensual and spontaneously composed - focussing on manually applied, dribbbly, streaky washes and agitated glowing hues. These are  contained in organic blobby shapes hovering in pale fields. In a post-conceptualist era they do inevitably look dated, although with the current summer issue of artforum having a cover story on ‘the ab ex effect’, Le Lievre’s methodology of delicate but turbulent overlapping puddles may well be very much in vogue.

Even though she studied at Canterbury where the main painting tutor is Roger Boyce, a Californian, the feel of Le Lievre’s work is more European than American - in fact it’s churning, rivuletted sensibility reminds me very much of the paintings of some of Rudolf Gopas’ students in the early seventies. (Gopas’ teaching at Ilam is considered the font of expressionism in New Zealand art history.)

Her best works in my view are imposing in scale (not domestically oriented) so you can bodily ‘enter’ the space and explore the intricate textures of the paint application. They also have less dominant shapes floating on a softer background. In other words, they succeed where the field they are inserted into is lacking in tonal contrast and textured with thin washes, so they are ‘in’ not ‘on’. The backgrounds tend to be too dominant. The dark shapes over-exert their influence inside the pale rectangle.

Many works are of handbag shapes - using charcoal squiggles or watery strokes as handles - bringing in a narrative and seemingly an attempt to literalise the forms and position them within gender politics.

So how would these works be read, if for example, a feminist rhetoric is intended? Is it an oblique reference to, say, the often discussed sacrifices Lee Krasner and Elaine de Kooning made as painters, playing secondary roles and eclipsed by their husbands Pollock and de Kooning? Is it more about the medium, ie. painting itself - in contradistinction to photography which, in the eighties, some women embraced in opposition to painting because of the latter’s masculinist historical associations?

Perhaps they are just bags, rather than handbags, and so open receptacles for any meaning that prevents the works from being perceived as ‘purely abstract’? ‘Real’ palpable objects loaded in rich associations, connected to daily life existence and not rarefied abstraction, a collection of visual qualities embedded in certain manipulated materials and studio methodologies.

The titles here I think intrude. They are too obviously literal and distract by over-determining. In fact I wish Le Lievre had not attempted titles at all. Just ignored the conventions of labelling each exhibited item - even the use of ‘untitled’ or numbering in sequences these days is crass - and let the problem of identification be sorted by viewer and dealer; if such a problem exists. Let the intensely pleasurable experience of looking at these paintings be the only focus, and not treat them as a form of illustration - with obligatory caption - that disallows opportunities for interpretation.