Shin and Katchadourian in Dunedin 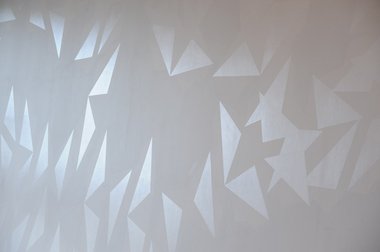 Fractus acknowledges Josef Albers' observation that we don't actually see colours, but rather we see only the synergistic optical effects they create in proximity to each other, and in this case the variations are infinite depending on the time of day, whether you are looking up at it from the ground floor, directly front on, or from a side angle.

Okay, Dunedin is not my usual critical bailiwick, but I decided to take a much needed break from the Christchurch quake. A short sabbatical in the town of my old alma mater Otago seemed just the ticket, especially when the availability of art in Christchurch is still a fragile touch-and-go situation, the scene remaining largely curled up in the foetal position and demanding diazepam, sugary tea, and hugs. I was pining for big gallery shows, and with COCA and Christchurch Art Gallery still off limits for the foreseeable future, I went south.

In entering the foyer of Dunedin Public Art Gallery I was greeted by a nostalgic rush of flashbacks to my Scarfie years (the bohemian aesthete’s version anyway) in the 1990s. The current building, a postmodern take on the classical temple of the Muses in white paint and blond wood, was completed while I was at Otago. And this year is the 125th year of DPAG’s founding, arguably (because it is vociferously disputed by some North Island institutions) making it the oldest public art gallery in New Zealand.

The foyer is a magnificent space, light and airy with its minimalist columns and the ventilation/pillarboxes that were known as the Tardises in the days when I volunteered at DPAG. Excellent use is being made of that space. On the “Big Wall” on the mezzanine floor is Jeena Shin’s wall work Fractus. A very subtle mural consisting of simple overlapping triangles of paint in a Futurist torrent across the wall in delicate whites and light greys, mat and gloss textures that change continuously with the natural light coming in through the gallery’s glass façade. The effect is reminiscent of Malevich’s subtle white on white monochromes.

Fractus harkens back to Shin’s fascination with the folds and creases in pieces of paper as being the optical net of dynamic tension she reproduced in a kind of abstract trompe l’oeil as the compositional structure in her paintings. The work acknowledges Josef Albers’ observation that we don’t actually see colours, but rather we see only the synergistic optical effects they create in proximity to each other, and in the case of Fractus the variations are infinite depending on the time of day, whether you are looking up at it from the ground floor, directly front on, or from a side angle. It’s as slippery as a politician covered in olive oil and dropped in a tank of eels.

Through the galleries is the exhibition Seat Assignment by American artist Nina Katchadourian, the DPAG’s 2011 artist in residence. The show hinges on the clever conceit of a cunning exercise stemming from the killing boredom of interminable long haul international flights. Constrained only what she can find on the plane, what she carries on her person, and her camera phone, Katchadourian has produced a number of very distinct suites of works in six weeks in Dunedin from thirty or so flights over the period of a year.

The chief inspirations are historical genres: still life, portraiture, and landscape. Birds of New Zealand for example takes the found and somewhat cliché photographic images of birds from in-flight reading materials (one hundred percent whatever it is these days), and transforms them into witty three-dimensional assemblages using what looks like the detritus from the bottom of a handbag - candies, sunflower seeds, and fluff. Reasonably innocuous New Zealand species are suddenly transformed into Birds of Paradise in Carmen Miranda drag, or have to share their environmental niches with recognisable but now grotesquely out of proportion alien interlopers. Naughty. Clever. I like it.

Lavatory Portraits in the Flemish Style is a brilliant set of Cindy Sherman-esque self portraits taken in the plane toilet when it was (mercifully) unoccupied, crafting Northern Renaissance-looking headgear and collars from paper towelettes, a travel pillow, and the artist’s own clothing. The apotheosis of this drag is the hysterically funny video work Acca Dacca Diptych in which two versions of the artist looking like extras from a Dutch genre interior conduct a po-faced lip-synching duel with AC/DC songs (“All Night Long” and “She’s Got Balls” to be precise) inspired by the in-flight music.

Of the suites of work, those least likely to succumb to their own shtick are series of very simple guerrilla portraits surreptitiously taken of the person sitting in the next seat just as they have fallen asleep, and Spirit Photography which uses reflections of the light on glossy magazine pictures and haloes of sachet sugar to give the impression of ectoplasmic auras. In one large diptych a finger pressing a ring against a flat with surface is immediately recognisable as an iconic image of the Virgin Mary.

This is sharp, witty work expressing extreme cleverness and ingenuity, that also successfully manages to explore the unique psychological space of the long post-9/11 international flight - a bunch of stressed and fatigued strangers crammed together in a metal tube and, contrary to all instinct, suspended against gravity in the air. The sheer density of the hang suggests, however, that just as the aeroplane is only just defying gravity, Seat Assignment may only just be defying gimmickry. Yes, the work may be striving for a spontaneity and subversion that avoids looking “artful” - but art is whatever is in an art gallery by contemporary definitions. On the whole, though, I like it - in a sea of international pretentious earnestness, there is nothing wrong with good art that has an irreverent sense of humour and entertains audiences increasingly jaded by the gallery experience.