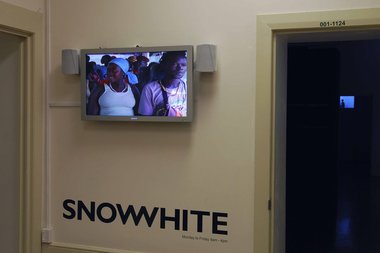 It is the contrast between the peacefully monotonous and serene outer front space and the agitated end gallery that makes this show subtly amusing. I'm not sure that is intended, yet the opposing treatments of pace, landforms, sound quality and eye movement seems calculated and is surprisingly bodily - even cathartic.

Martin Rumsby is a New Zealand experimental short film maker, curator, writer and film enthusiast who in the early eighties lived in North America and promoted New Zealand culture there. Besotted with the medium as a means of pushing avant-garde ideals, and a vocal champion of internationally regarded great artists like Stan Brakhage at a time when nobody else in this country seemed to want to know, he is a well known personality in innovative film circles. Here at Snowhite Rumsby screens four of his own films (two 16 mm) as an installation with loops. He presents himself as a curator, even though only his own films are included (slightly slippery I think); no dates are given or chronological sequence, but a clear sense of shrewd screen positioning and spatial / aural control is established.

Rumsby has divided the available gallery space into three. Outside the front door in the UNITEC corridor on a LED screen he presents Equatorial, a series of rural landscapes shot in South America I think, mainly filmed from a canoe with a outboard motor going up the rapids of a large river and looking over the shoulders of a tall man guiding the craft from the prow. The slow languid pace of this ‘cinematic’ experience is in vivid contrast to the vertiginous frenetic rhythms of the digital works inside the gallery.

On the other side of a dark charcoal wall that partitions the gallery space are two works that both involve rotation. On a LED screen images of traffic moving down a busy street are digitally treated so they appear reflected on the silver mirrored surfaces of a large ball and on the inside a splayed open box. The images spin clockwise, weaving in and out of the central ball - seemingly to the rhythms of a 45 rpm postcard/disc featuring prominently in another larger film projected on the opposite wall.

This third film is made in Canada. The sound from the revolving postal disc (the plastic is covered by an image of a modernist building) is of a chopped up French ballad sung by a woman to the cascading strings of a shrill orchestra. A boy on a bike (also rotating) has sent the card to the girl who is playing it on an old fashioned turntable. The camera zooms in on her face (also spinning) and her superimposed enlarged eye as she listens to the music.

Rumsby’s fourth film, shown in the small room at the end, also uses tunes - accompanied by snippets from The Sound of Music, with Julie Andrews running through the yellow meadows in front of the Swiss Alps. The screen is gridded up into three or four isolated rectangular modules. Sometimes the singer is skipping her way around tussocked marshes or gliding through rows of silver birches, other times staggering backwards. Her voice goes backwards too I think, with a lot of reverb and spliced compression. Flickering rectangles slide up and down or across the screen while the music blends into the banal Eurovision song wafting through from next door.

It is the contrast between the peacefully monotonous and serene outer front space and the agitated end gallery that makes this show subtly amusing. I’m not sure that is intended, yet the opposing treatments of pace, landforms, sound quality and eye movement seems calculated and is surprisingly bodily - even cathartic. A clever interesting installation.