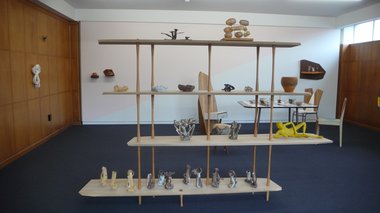 Here you sit at a table and quietly enjoy the objects and furnishing around you. You become part of the installation. There is none of the usual unease found in both gallery and shop where you find yourself watching where you stand, and how.

In 1998 the Museum of City and Sea in Wellington organised an exhibition to pay tribute to one of New Zealand’s earliest modern art dealers - the Helen Hitchings Gallery, which opened in 1949. To these contemporary eyes what was notable about Hitchings’ Gallery (looking at photographs from back in the day) was how the space resembled not a gallery but a modern domestic interior. Accompanying the McCahon, Woollaston and Angus’s on the walls were Len Castle ceramics and Ernst Plishke furniture. Hitchings was an all-round trailblazer, espousing a modernist outlook that as Plishke would have put it, promoted designs for living.

Sixty years later, the central component of the Museum of City and Sea exhibition was a recreation of the gallery space. The intention was good, yet it ended up like one of those dodgy colonial village style numbers where a facsimile of the past was skewed by the present. You were blocked off from entering the gallery space by a faux brick wall, peering through paneless windows, defeating the whole spatial experiential logic. Furthermore, the presentation didn’t try to replicate exactly what the gallery would have looked like. With silhouettes and cut-outs it mixed real objects with prop representations of them. It was one of those wonky design-led displays where a museum’s presentation ideas compete with rather than illuminate the artefacts.

I was reminded of all of this, in all the right ways, sitting amidst Karl Fritsch, Martino Gamper and Francis Upritchard’s collaborative exhibition at Hamish McKay Gallery. In arrangement it’s designed to resemble an installational take on an apartment living space, with the skewed cuts of Gampers manipulated found objects as furniture, and Upritchard’s clay figurative work riffing off the created spaces’ clean lines. You immediately felt at ease but off balance.

It’s loving as well as cutting, feeling like both a tribute and an interrogation of modernist art, design and craft traditions. It champions the integration that cultural tradition used to espouse objects and the entire interior as a fine art environment. You get that without reading the exhibition handout - which tells you the title Gesamtkunsthandwerk is a German word meaning making an environment that involves all of the parts of the arts, and in particular the work of the handmade.

Indeed much pottery here is reminiscent of the earthenware generation of Castle and Mirek Smisek. Yet in other works clay is twisted ungainly and unglazed into rough figurative movements. The erect tubular forms seem positively phallic, particularly when viewed close to several of Upritchard’s small male figures stroking their penises - emblematic perhaps of the modernist male artist hero, too busy stroking his own ego to provide things of utility for the world.

That this exhibition should feel so unusual, so refreshing in the way it makes a gallery space a living space with such natural grace, makes the uniform ways we usually present art today seem stilted and awkward: how our gallery environments pretend to be some kind of uncomfortable other, when the work will ultimately have to sit together in a living environment as a community.

Originally commissioned and presented at Govett Brewster, McKay’s gallery actually feels like the perfect site, particularly its carpeted wood-paneled back room. It could be an inner city apartment. Likewise, for Michael Stevenson’s small survey show there a few years back McKay’s felt like a bank manager’s office from the 70s.

Here you sit at a table and quietly enjoy the objects and furnishing around you. You become part of the installation. There is none of the usual unease found in both gallery and shop where you find yourself watching where you stand, and how. It’s as if the artists found a second hand store in Taranaki and cleaned it out of everything from a crochet set (used to make a coffee table) to its shelving units, giving the exhibition a strange cross-generational cohesion.

The artists tilt at design traditions with witty, smart expressive cuts and jabs to the familiar domestic object, playfully jamming together ideas about how things are displayed and the way different materials are combined. Like the Karl Fritsch shows at McKay and City Gallery last year, it is joyously rebellious in the way it cuts up the precious and combines elements together, upturning hierarchies. The work relishes risk as such an innate part of its process it’s hard to believe what it turns up is not more familiar (a sign surely always of great art).

An orange speckled glass paperweight dome protects a set of rings on a heavy chunk of polished wood, cut at perverse angles. A crimson triangular tabletop is cut into an unadorned log of pine. Post-punk perfection, it’s a riotous yet cool clash of the ornamental codes. An adventurous confluence of different design ideas, pushed around the rooms as if in some parlour game by the three artists. What was just plain dodgy about the Hitchings Exhibition is here a clever opening out of taste and accepted ideas.

It doesn’t all work - Upritchard’s long gloved mannequin hands grabbing the back of chairs in particular feel just as wonky as the devices in the Hitchings show - but that risk is part of the show’s joy. The bubbling over of ideas to cover the available surfaces.

With its disruption of the usual, tired gallery presentation status quo, this no doubt will be - like the Michael Stevenson show a couple of years back - one of the most interesting exhibitions of the year in Wellington.