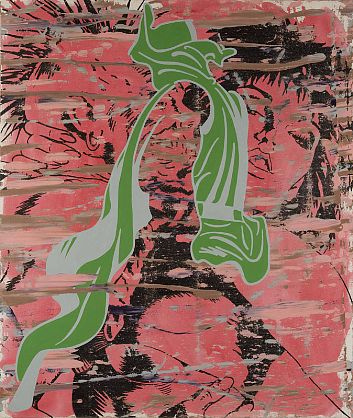 The paintings of Tjalling de Vries shrewdly blend the flattened horizontal brushmarks of Gerhard Richter with the fragmented cartoon imagery of Arturo Herrera to make poppy images that look a little like the Nouveau Réalist ‘poster ripped' works of Raymond Hains and Jacques de la Villeglé. There is a definite European sensibility there, especially when he is painting on to recycled billboards.

Bath Street Gallery has a history of showing post-grad work from the University of Canterbury art school, and such projects are usually worth investigating - if not just to match up against the various local Auckland institutions, whose end of year displays are usually far too unwieldy and fleeting to allow any serious analysis. I’ve seen several Ilam presentations here over the last two or three years and this one is by far the best. There is an effective synthesis generated amongst the five, carefully placed, participants who consist of a photographer, painter, and three sculptors.

Of course reducing these artists to such basic methodologies is over simplistic. For example the photographer often presents her work in a sculptural format, and one of the sculptors (like say Peter Madden) is a collagist in sensibility. Categories dissolve and contradict.

Nicole Bourke’s other-worldly organic polystyrene sculptures, warty protuberances covered with flock, owe something to Yayoi Kusama but, though colourful, are less decorative and holistic - being more botanical or like marine life. The large works in the gallery are not as intricate or literal as the smaller spongelike wall sculptures in the gallery office, or the box of gorgeous acrylic polymer studies on paper.

A more clinical, scientific sensibility is presented by Alison Staniland where images cut out of magazines are presented on stacked rows of microscope slides, suspended singly in dense twisting clusters, on hovering swinging shelves, or aligned on a table top. She seems interested in verbal taxonomies, seen directly front on or else morphing into spiralling helix structures visible sideways through the glass edges.

Jane Bowman uses suspended instrument bits (piano parts) painted and presented theatrically within glass fronted cubes. Sometimes jets of air from a hidden compressor subtly disturb the hanging dismantled components, which are painted with enamel, I think needlessly. The dark opaque glossy colour brings a stodgy gravitas that hides the lighter textures of the underlying wood and metal. Something has been lost.

Bianca van Leeuwen’s high contrast, pin hole camera photographs, on glass plates set in the side of insect terrarium boxes, or on aluminium panels, have a McCahonesque or van der Veldenish interest in stark dramatic light on hill forms. In Static Juncture you can peer through several glass plates in alignment (on awkward spindly stands) and get the spatial separation of overlapping forms. Another work, Conscripted Reflection; Collective Bearings uses steel lamp frames (holding glass plates) suspended over trays of oil, alluding to geological processes below the skin of the earth. They hang like pendulums and seem to reference time as a crucial ingredient within land formation.

The paintings of Tjalling de Vries shrewdly blend the flattened horizontal brushmarks of Gerhard Richter with the fragmented cartoon imagery of Arturo Herrera, to make poppy images that look a little like the Nouveau Réalist ‘poster ripped’ works of Raymond Hains and Jacques de la Villeglé. There is a definite European sensibility there, especially when he is painting on to recycled billboards. I find the paintings with dismembered body parts of comicbook characters interwoven with smeared multi-hued paint especially intriguing. The smudged paint goes under and over the isolated doubled up limbs and twitching coat tails, and the panels from a distance look as if made of torn up /reglued paper.

This is probably the best looking exhibition - in terms of work positioning - I have seen at Bath street. The large L-shaped space is carefully used, with no ‘dead’ areas, so the suspended sculptures of Van Leeuwen, Bowman and Staniland interact well, while the collaged content of Staniland’s stacked glass fits nicely with de Vries’ paintings, as do Bourke’s organic paint studies on paper. An exceptionally interesting group show.

Hi John, Good to read your thoughts on the show. You talk about the enamelled pieces in my large work, ...

Hi John,
Good to read your thoughts on the show.
You talk about the enamelled pieces in my large work, 'Mikros Pianola Kosmos' hiding “the lighter textures of the underlying wood and metal”- The wood and metal in this particular case were watermarked and rusted beyond repair, taking away from their original appealing textures. Whilst this could have been interesting to explore, it was not an aesthetic that was relevant to this body of work. My practice is centered on searching for old discarded objects and furnishing them with a new life. This usually involves an intensive reworking of the state that these objects are found in. However, the four smaller works from this suite, the 'Pianissimo Microcosms,' (that do not have glass) have employed the objects in the way that you speak of. The pieces in these works were specifically salvaged because they were in a much better condition for cleaning, sanding and varnishing back to their original glory. Within the five sculptures there are varying degrees of representation of the same found objects.
I am glad you found it an interesting show,
Jane Bowman.