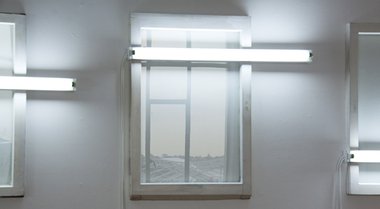 The blinding reflections of the gallery windows in the glass, if it is a bright overcast day, effect the perception of the tube, some sections of which will disappear while other portions (in front of the wall) become more vivid - bordered and accentuated by parallel shadows. You look closely to see how artificial and natural light mingle.

Seven glass window panes hanging in rows on the gallery walls, each framed in white painted wood and horizontally traversed by single illuminating fluorescent tubes that extend out to the right. Their position moves up and down from frame to frame. Bill Culbert presents these and twelve unframed coloured photographs of wooden crates with smashed up bottoms, mounted on board, in this a late autumn Crockford show.

The two types of work are - naturally with Culbert - about qualities of light. The photos focus on sunlight hitting the front edges of the pale brown boxes, a suite of glowing, sometimes tilted, flimsy rectangles, causing deep shadows from their sides to be cast onto palings of a dilapidated grey (French) fence that serves as a backdrop.

Culbert’s reflective windows with fluorescent lights are about the moment you find yourself standing in front of them (or to one side), how they (and the walls behind them) interact with the natural light that is in constant transition - bouncing into the Endeans Building windows from the sky and harbour front. With the ambience in the room altering dramatically from early morning to late evening, the time you visit to examine these Light Levels is crucial, as is your position in the gallery - moving from the darker entrance in the hallway to the outer much lighter, dominant row of windows, and back.

It depends on what part of the sculptural relief holds your interest. The blinding reflections of the gallery windows in the glass, if it is a bright overcast day, effect the perception of the tube, some sections of which will disappear while other portions (in front of the wall) become more vivid - bordered and accentuated by parallel shadows. You look closely to see how artificial and natural light mingle.

Frames and shadows are the theme for the photographs too. The way the shadows extend off to the right of the fragile balsa quadrilateral is repeated in the hung windows where the fluorescent tube usually goes off to the righthand side, simultaneously illuminating and shading the wall behind. One row of photographs consists of vertical rectangles, the other horizontal. Each elaborates on the shadow direction differently. Being dark brown, in the light-filled room they look like portholes in a ship.

Of the two series, the window/tubes are more interesting because they depend utterly on how they are installed, the distinctive qualities of the room containing them and the proximity of dramatic light-effecting architectural features. The crate photos on the other hand seem a bit trotted out and repetitive. They provide a good foil to the more nuanced Light Levels but become a little tedious en masse.