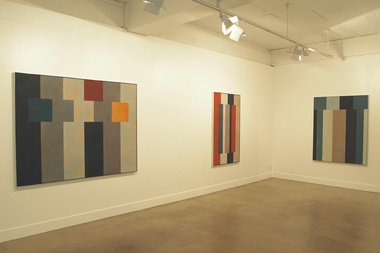 There is not a curved line in sight in this L-shaped room. The emphasis is on the perpendicular and horizontal - how they intersect and seem to allude to the pronounced right-angle of the floorplan - and the insistent rhythms of repetition.

Roy Good had a major survey of his seventies paintings about three years ago in Titirangi, an enlarged version of which was recently presented in CoCA in Christchurch just before the earthquake, and he has had other smaller shows at Artis. This current exhibition focuses on his Lintel series, geometric rectangular abstractions that collectively and brilliantly exploit the architectural particularities of the narrow Artis Gallery premises.

There is not a curved line in sight in this L-shaped room. The emphasis is on the perpendicular and horizontal - how they intersect and seem to allude to the pronounced right-angle of the floorplan - and the insistent rhythms of repetition. The focus and restraint works extremely well.

Some of these tonally precise acrylic on canvas paintings seem to allude to the doorways, columns and lintels of ancient temples (Egyptian or Greek, even Stonehenge); the thinner vertical oblongs or coloured squares could also be windows. The scale is perfect. Intimate without being too small. In a comfortable space for one to three people - with outstretched arms - to easily move around in.

There are three types of stretcher: a t-shape, and a horizontal and vertical rectangle. The severe oblongs or squares within their contours, are neither compressed or expanding, but easily float, locked in with their neighbouring forms, and subtly pulse as such. Within every painting no single geometric shape dominates - each happily interacts with the other components to create a resolved architectural form.

Some of Good’s more recent works here (like Lintel & Column - for Christchurch, 2011) explore nuances of glazed misty colour within each pillarlike division, introducing a surprising hint of prettiness, albeit restrained. These works don’t need such chromatic flourishes, yet it is not excessive - the dynamic compositional tensions are essentially sustained throughout. On its own formal and associative terms, this is a particularly successful and sensitively installed exhibition.