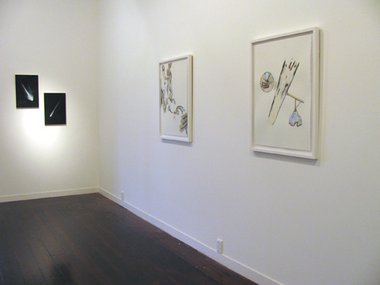 This show is an odd combination of contemplative images about thinking processes, mixed with ruminations on corporeal existence. The way the two subject matters interact is surprising. The two types of painting work well together.

Simon Esling
The Music of Chance

Simon Esling is known for his delicate ink and watercolour works on paper showing images of finely rendered machinery, architecture, weapons or body parts, combined with flowing organic forms, gases or liquids. There is a rebuslike quality that suggests a decoding is possible after the complicated symbolic visual elements have been analysed.

The works of this type that succeed best exploit the negative spaces between depicted ‘narrative’ components. The whole surface of the paper engages you, not just the intricate bits. Those that don’t succeed fail not just because of adynamic placement but also because of the way they sit on the picture plane. Their manner of floating in front of it, and not integrated or behind, is too intrusive.

This view, I know, is a modernist tenet, one that I happen to consider accurate. This show is far better than say, Esling’s display at Gus Fisher last year - that lack of ‘floating’ being a major reason.

So the content - head body parts such as bits of ear or skull, mixed with cogs, machines and planks of wood - imply Esling has theories about interiority, various subjective mental processes and emotions - and their connections to the conduits and ‘wiring’ of the senses. He seems interested in how the mind can continue even when cut or blocked off from incoming stimuli. His images (particularly those on the righthand wall in Roger’s space) suggest a sort of conceptual black box, an imagined saline floatation chamber, but without literally depicting it, or espousing any resulting hallucinatory after-effects.

One watercolour is in fact called Living inside your Head, and this explicit sense of isolation, almost a form of solipsism, is extended with some Flashe vinyl paintings (on wooden panels) of comets and shooting stars whizzing across the night sky. These works accentuate the smallness of a single life, its influence and its brief burst of existence: a life lived on a remote planet that (with both life and planet) flares like a match and is then extinguished.

This show is an odd combination of contemplative images about thinking processes, mixed with ruminations on corporeal existence. The way the two subject matters interact is surprising; the two types of painting work well together.