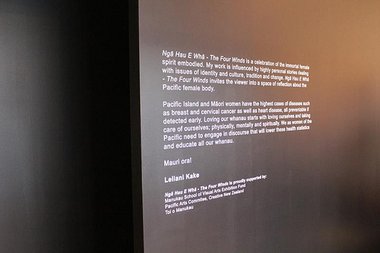 To a large percentage of the gallery's audience, these models are clearly and personally recognizable - an intended aspect of the work that frames the project as performative. The gesture of the performance is to bring the taboo of nakedness uncomfortably close for the audience. One needs to see the project in terms of a community actively breaking its cultural codes.

Leilani Kake’s Ngā Hau E Whā -The Four Winds is consciously a site-specific video work, installed as a purpose-built darkened enclosure, with four videos projected onto its claustrophobic walls. Each projection features a woman floating nude, supine, in a pool of cold water. Their nationalities reflect their audience in their diverse predominately Pacific oriented make up. The women are Tongan, Samoan, Papa New Guinean Australian afakasi, and Cook Island American afakasi. Only one of the models, Julia Mage’au Gray, is not connected to Otara. The other three either grew up in the community, have generational and familial ties there, or work in the area.

The relevance of this is that to a large percentage of the gallery’s audience, these models are clearly and personally recognizable - an intended aspect of the work that frames the project as performative. The gesture of the performance is to bring the taboo of nakedness uncomfortably close for the audience. A point of reference for Kake’s use of nudity is the fact that in Otara’s public pools everybody swims fully clothed. In understanding the gesture Ngā Hau E Whā - The Four Winds is making one needs to see the project in terms of a community actively breaking its cultural codes.

The nakedness is initially designed and expected to shock its audience. However, the artist is aware of both the potential and limit of this reception, for the work is a stated response to the oscillations of approaches by the health industry: between fear tactics pitched at Māori women and the recent employment of humor in cervical screening information targeted at Pacific women. This critique is encoded into the mechanics of the install. Before entering the gallery a wall text discusses the rates of preventable diseases and cancers amongst Māori and Pacific women. Any shock encountered by the nakedness or from the imagery is misplaced. Or the accumulation of shock felt by everyone, all the visitors, a community, is orchestrated misplacement by the artist. It is outrage that belongs elsewhere. In the face of this, there is an inherent dignity to the models. Their suspension allows the audience suspension.

If we interpret the work with regard to performance then we can see Kake is separating the individual women from their digital selves. Their bodies are to personalize the facts and statistics, while their digital avatars are to embody them. The videos are divided into four stages of life. At times they display signs of life; a model will kick or upright herself, or sing softly. But mostly they concentrate on floating, which coupled by their paleness caused by the diversion of blood flow from their skin, gives a corpse-like appearance in the pools.

Unlike a recent art historical approach that reflects on the body’s transmutation to facts, abstractions, and data, Leilani Kake takes a more didactic approach. Her videos think through the horror of the statistics for us; the pain is not separated from the information, or the humanity from the recipients. Though we (the audience) get to visually wake up from the phantasmagoria, the reality is that any of the models possesses a chance of remaining there. This is a moment where the shows unreality suddenly occurs to be the same unreality as one might feel towards textual health statistics. The moment is political, it re-organizes the proximity of the information’s reality.

The video’s ambivalence towards advertising I earlier touched on does present an interesting problem. Does an artwork retain the flaws of its influences? Ngā Hau E Whā - The Four Winds responds critically to television by becoming a piece of meta-advertising. In doing so it leaves itself vulnerable to similar criticisms as its precursor - although its stakes are raised higher. The art is compromised, the material is brought closer.

From this a proposition develops: the gallery becomes an installation, but when in the service of meta-advertising, can the information be a ready-made? Kake’s show seems to do this; the art work is subsumed as structure, highlighting the complexity of the information at its heart. 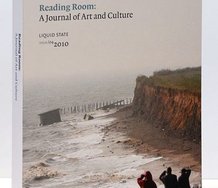 READING ROOM: A JOURNAL OF ART AND CULTURE

Edited by Barton, Conland and Curnow