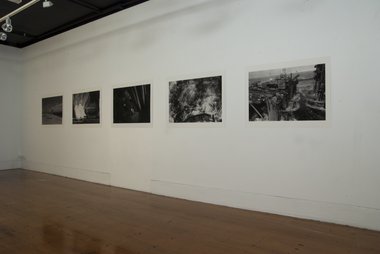 Most of Malcolm's photographs of the late seventies /early eighties, Inside Offshore, were taken secretly in high security situations - especially the outside furtive shots of grimy helmeted men working below him on gusty platforms above the turbulent North Sea - but the indoor portraits of colleagues working in kitchens or playing violins in bunkrooms are affectionate and open.

This Unitec exhibition, examining the lengths the oil industry goes to extract or transport its primary product, was put together by Lisa Reihana, and is in three parts: John Malcolm’s two large billboards on the side of a building on Carrington Road, directed at the passing traffic; his black/white photographs (framed or pinned up) in Snowwhite Gallery; a coloured slide sequenced documentary made by CLUI (Centre for Land Use Interpretation) on the trans-Alaska pipeline that was built in the late seventies to transport ‘black gold’ to West Coast US market.

The billboards are kind of funny, in a black, morose, scary sort of way, for the photographed lifeboat (seen alongside a huge rig) is unable to be lowered to the sea. The rigging is too short and so it becomes a symbol for the oil industry’s incompetence, its ineptitude in the face of disaster. The juxtaposition of the two images is clearly loaded.

Most of Malcolm’s photographs of the late seventies /early eighties, in the series Inside Offshore, were taken secretly in high security situations - especially the outside furtive shots of grimy helmeted men working below him on gusty platforms above the turbulent North Sea - but the indoor portraits of colleagues working in kitchens or playing violins in bunkrooms are affectionate and open. The detail of the machinery and ominous churning water is what creates the work’s appeal, showing a dangerous life on these women-deprived constructions far from shore. Six big gutsy images of rigs are pinned up on Snowwhite’s pristine walls; fourteen more intimate smaller ones are presented behind glass in metal frames.

Reihana’s inclusion of the CLUI doco, The Trans-Alaska Pipeline, as a foil to Malcolm’s images, is a stroke of genius. The text beneath this long forty minute sequence of gorgeous landscape photographs is highly informative - a north-south conduit 800 miles long with a hundred thousand 40’/60’ sections and costing eight billion dollars. Especially fascinating are its descriptions of measures taken to prevent mindless vandalism or calculated sabotage, the small settlements linked to it and its history with major earthquakes. The slide sequence however is marred by the background piano music by John Luther Adams which is too repetitive and intrusive. You can see the images here (blissfully soundfree) on your own computer.

This is an elegant show that though sometimes subtly critical of the oil industry, could almost be promoting its glamour, determination and resourcefulness. There are (naturally) no images of pollution or conflagration, everything is peaceful and serene - on the surface. Part unstated, often understated and decidedly chilling.