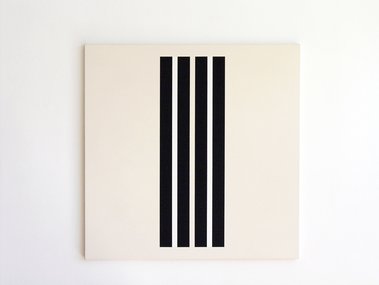 What I find utterly intriguing is just how different Walters' koru paintings are from his other investigations. They are so overtly time based, requiring the eye to take time assessing compositional layout and tonal contrast. Most of his other works have a different quality entirely, focussing on qualities to do with picture plane tension, optics or logic.

Gordon Walters
Works from the Estate

In this selection of a dozen canvases and the same number of drawings on tracing paper or collages - all from the Walters Estate - Sue Crockford presents a survey of Gordon Walters’ painting investigations: a magnificent demonstration of the breadth of his thought; a showcase of his range of interests. And though I for one adore his koru paintings (for reasons of musicality) more than his other projects, and would be happy to see only koru works, this show is an excellent way to examining his various approaches to painting organisation. Many are visual conversations with other artists, here ranging from Klee, Schoon, Hattaway, Herbin, McLaughlin, Riley, and anonymous kowhaiwhai rafter painters - putting forward his own response to their characteristic forms.

Even the most ardent and knowledgeable Walters enthusiast will find surprises here. Some works are sweet and colourfully exuberant, such as Untitled 1985, a geometric tip of the hat to the compositions of August Herbin. Others are austerely minimal with no chroma - like Untitled 1978, an investigation of a single section of one of Bridget Riley’s vertical bar paintings.

A few explore after-images, white auras that hover around the sharp edges of black rectangular shapes, or contextually caused darkening optical washes over white strips. Others look at the illusion of transparency or (as in two examples) the device of en abyme, where a painting refers to itself and depicts its own image - a rectangle inside a rectangle.

Whilst the viewer’s experience of standing in front of his work and concentrating on his image was always Walters’ main concern, this show brings out his working processes, starting with tracings made from earlier works which he cut up, reassembled, retraced and made paper collages from - testing scale as he went along.

What I find utterly intriguing is just how different his koru paintings are from his other investigations. They are so overtly time based, requiring the eye to take time assessing compositional layout and tonal contrast and how they effect the pulse. Most of Walters’ other works have a different quality entirely, focussing on qualities to do with picture plane tension, optics or logic. The gaze there doesn’t seek matching configurations of activated shape in the way that the positive/negative koru or Capogrossi-inspired images might do. These paintings are more holistic, more total, in their viewer function. Less complicated in the ocular muscular sense, though not in required analytic skills.

Crockford’s show is a rare opportunity to think about the different sorts of anticipated viewer interaction behind these practices, and the jump between one variety and the other. Maybe Walters’ friendship with Schoon is part of the equation. Or the Maori hostility to his use of their motif that surfaced at the time of the Headlands exhibition. Whatever the reason, that gap helps make this exhibition compelling viewing, something to ponder over when attending to these wonderful works.