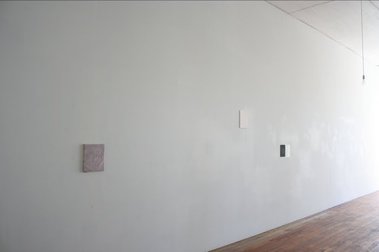 This is how I want to be able to notice the artwork. I want it to simply abide in space, like a lightbulb, like a doorway, like those jeans and that shirt, vaguely in the shape of a human, stolidly upright on the other side of the room. So I can hopefully enter into some kind of honest exchange with the work.

It’s kind of an obvious thing to say, but what I like about writing art reviews is that it gets me to attend closely to my ways of experiencing art, to actually think about that activity at some attempted remove, to endeavour to find a way of understanding what’s going on in my act of reception.

I’ve never pretended to be an art historian, and people who’ve read my reviews will understand that what interests me in writing about art is the search for an experiential narrative that taps into and attempts in a way to broaden the relationship that I form with the artwork. If I were inclined to be pretentious (and perhaps I am), I might talk about this in terms of phenomenology (but I won’t).

Another thing: I’m sometimes guilty of writing protracted introductions before announcing my general theme - or even stating the bare subject of discussion.

Richard Bryant is associated with A Centre For Art. If you follow that link you’ll discover a most charming thing about their website: the way, when you put your cursor over a link, the linked word disappears. (If you go to their Friends page, you can run your finger down a line of the country’s non-commercial art spaces and make them disappear, one by one.)

And in this business of attending to my experience of art so that I can then go home and write something interesting about that experience, there’s an element of working at a level of subdued consciousness to get around this problem that when we pay close attention to something it has a way of escaping, dissociating from meaningfulness, asserting a kind of hubris of beingness that detaches it from the world, from what actually made it capture our attention to begin with.

I find I have to trick myself into being taken by surprise. I often hum some phatic little tune, just audibly, over and over. Or recite a line in my head, over and over. I seek distraction, an unfocused gaze, an unprivileged field of vision. That’s how I want to be able to notice the artwork. I want it to simply abide in space, like a lightbulb, like a doorway, like those jeans and that shirt, vaguely in the shape of a human, stolidly upright on the other side of the room. This is how I can hopefully enter into some kind of honest exchange with the work. Otherwise the bullshit (people’s words, mostly) will overpower my precarious act of perception.

Richard Bryant does not seem to me enamoured with words. We met briefly, and reticent - offered up by a third party - indeed seemed an apt description.

And I wanted to review his show at HSP - and I’ll hold doggedly to the claim that such a late review is apt, with the show erased now, ephemeral as it was, as stuff generally is.

And though I didn’t realise it then - but am realising it now as I write - what I wanted to review was the way Richard’s works, and how he arranged them within the great, cavernous space of HSP, brought the drama of my art-engagement protocols into the theatre of their own exhibitedness. By being there - by being undeniably there, and being art - but by refusing to be either ostentatiously there or ostentatiously art - the works in their collectedness simply hovered, no more or less silent than the marks on the walls or the lightbulbs or the doorways or the huddled groups of opening-goers circling themselves ever tighter against the show’s refusal to bear down on them and accuse them of something.

And so they reminded me that this, precisely this, is how it is best to see art, to find art. Despite how loudly it may be calling to you to direct your attention to it and to it alone, that peremptory cry is always, always a ruse, a trick it has learned somehow to play, and is encouraged to play, in a diseased age, by bureaucrats and websites and officialdom.

It creates a gap, a space between you and the work. It is an othering of the work that becomes inevitably an othering of you - alienating you from the possibility of experience borne in space and time.

These slight, withdrawing works of Richard’s are paintings that barely raise themselves above being readymades - paper, silk, pigment, come together through abstracted human labour in the service of some foreign endeavour - while their ruled lines and monochromy remind us gently of Rothko, and the modern, and intention.

So they walk a line between the incidental and the aesthetic, between the eclipsed and the incandescent, coaxing us just enough into noticing them - along with the doorways, and the windows, and the sky. 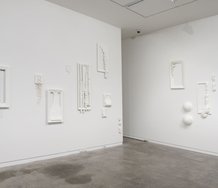 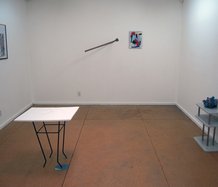 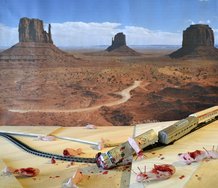 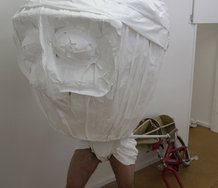