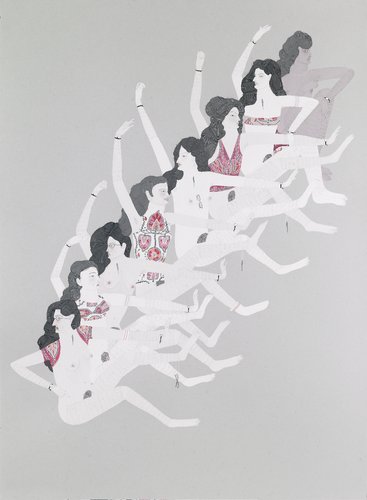 The Pimp Squeaks are uncomfortable. Their eyes roll back in their heads, they bite their tongues and flail about in wonderful, unknowable states of agitation. These psychological states are amplified by their anonymous surroundings. Each group hovers above an indeterminate grey background, lending the works a cool sense of interiority.

For Pimp Squeaks, her first solo exhibition at Ivan Anthony Gallery, Dunedin-based painter Kushana Bush presented a series of works on paper. Drawing on the traditions of Indo-Persian miniatures, mediaeval illuminated manuscripts and Japanese woodblock prints, Bush paints carefully arranged groups of figures in a benign palate of taupes, greys and soft pinks that from a distance suggest stylized abstractions. These gentle hues and subtle rhythms are clever ploys that encourage the viewer to look closer.

Intimate examination of the works reveals wonderfully twisted scenarios. Bush’s sitters are agitated, unpleasant, aggressive. Semi-clad in socks and y-fronts, they jostle for space and gnash their teeth. Cheeky phalluses tip out of underpants or flop over the thighs of others; these paintings are not for the prudish. That said, the configurations are far from orgiastic. In Pimp Squeaks, like her earlier Slump Series, depictions of implicit sexuality are riddled with anxiety. Bush revels in the abject, delineating in delicate colours the ugliest of details. Stubbled faces, bloodshot eyes and bloody, bandaged cuts are all deftly executed by her steady hand.

On top of this, her troupes are equipped with a selection of incongruous items that fuse the contemporary with the ancient. Turbans and patterned waistcoats mix with tattoos and the latest Nike accessories. In Leg Avenue (which features the only entirely female grouping of figures) women tote wristwatches while spectacles and Bic pens dangle from chains around their legs. These objects disrupt the otherwise ancient aesthetic suggested by the women’s hieratic posturing. Some wear exquisitely patterned shrugs and boob tubes, the colours of which highlight the angry redness of their genitals. There is a delightful tension here between the delicacy of execution and the vulgarity of content.

The works are densely painted in layers of pencil and gouache, an unforgiving medium that makes no allowance for mistakes. Once mixed with water, gouache needs to be painted quickly - one small slip-up can destroy days of work. In an Otago Daily Times interview, Bush described her method as ‘…a very tense, concentrated process’, and one could argue that the intense concentration required to make the paintings has a flow-on effect to Bush’s subjects.

The Pimp Squeaks are uncomfortable. Their eyes roll back in their heads, they bite their tongues and flail about in wonderful, unknowable states of agitation. These psychological states are amplified by their anonymous surroundings. Each group hovers above an indeterminate grey background, lending the works a cool sense of interiority. In Pimp Squeaks, a group of moustachioed gents crouch in an orderly, womb-like posse. Their tiny clasped fingers create a directional flow that points outside of the frame at something unknowable. They exist outside of space and time.

The restricted palette, tight groupings and stylized figures lend the work a uniformity that is of course intentional. But one can’t help but wonder; where to from here for the artist? Bush’s style has evolved significantly from the looser washes and earthy tones like those found in her 2005 Landfall spread. Recently, however, the paintings have developed a sameness that hopefully won’t become a trap for the artist.

Nevertheless, there is no doubt that the works are incredibly clever in their uncanny ability to simultaneously attract and repel the viewer. Their delicacy and humour is lost in reproduction - to succumb to Bush’s strange visions you must seek them out in the flesh. 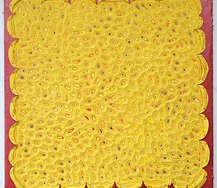