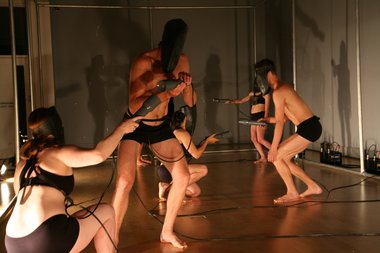 With Points of Contact presented in the year of Govett-Brewster's 40th anniversary, it seems timely to reflect and build a more complicated picture of post-object art as foundational for both the gallery's history and New Zealand contemporary practices.

Bringing together the film and sculptures of Lye, parangolés, sculpture and performance documentation of Oiticica and the reconstruction of Allen’s 1969 Small Worlds exhibition, the connections between the artists are explicit in their similar use of movement, colour and light. However, it is the restaging of Allen’s 1974 work Contact over the opening weekend that reinforces and brings these references to life, provoking discussion on memory, the archive and historiography as well as societal structures then and now.

Since the 1970s commentators have noted the distinct influences for post-object art here as compared with the American lineage of modernism to minimalism, conceptualism and then post-conceptualism. In the publication New Art: Some Recent New Zealand Sculpture and Post-object Art, edited by Allen and Wystan Curnow, a full page was dedicated to Lye, and in 1998 the curators of Action Replay also emphasised, ‘There was no New Zealand minimalism and very little that could be called classically conceptualist… If there is a connecting thread, and a group of practices that replaces minimalism as a transition to the post-object, it is kineticism’.

This must have been striking for Cann and Vicente, both of whom studied in the United States, and with Points of Contact presented in the year of Govett-Brewster’s 40th anniversary, it seems timely to reflect and build a more complicated picture of post-object art as foundational for both the gallery’s history and contemporary practices.

Given that Allen’s 1969 Small Worlds exhibition was a watershed moment for installation art in New Zealand, it is interesting to see this series of ephemeral works reassembled. Each considers the body in space; some inviting visitors to walk through clinging nylon environments, while Space Plane and Water Pillow are trippy optical journeys. Compared with images of the original exhibition at Barry Lett Gallery where fluorescence seemed to envelope the entire show, here the light is more diffuse and each work distinct, an example of the subtle changes necessary for a new site and context.

Reconstructing artworks like this raises a number of issues around authenticity. It is impossible to replicate something precisely, so what aspects are most important to retain and what can be altered? What shifts occur when temporary or process-based works that resisted commodification are remade? Should old or new materials and technologies be utilised?

These concerns are familiar to Cann and the Len Lye Foundation who often remake, or even build for the first time, Lye’s sculptures from sketches, plans or photographs. They will surely also become common problems for those involved with Oiticica’s estate due to the unfortunate loss of the majority of his works in a recent fire. The difference for Points of Contact is that Allen was available to advise throughout the install and, though relying on memory, he could recall his key intentions, commenting that now he had the resources to create the works ‘perfectly’.

Designed as a single project with three parts, Contact consists of Computer Dance, three blindfolded couples attempting to locate each other with basic technology; Parangole Capes, a slow and erotic casting aside of fabric sheaths; and Body Articulation/Imprint, six performers covering themselves and then each other with red, blue and yellow paint. At first it seemed an unusual decision to employ a group of dancers to re-perform Contact given their distinctive body types and learned movements compared with the College of Education students who were involved in 1974. Yet the idea of repeat performances is most common within the disciplines of dance, music and theatre where an existing script or choreography is reinterpreted by the performers and chance intervenes to create slightly different versions each time.

Viewing the performance as a group, it felt like our shared response was another component and according to those who had seen the original this was not dramatically different. For Computer Dance and Parangole Capes we were quiet, curious observers, and then in Body Articulation/Imprint there were eruptions of laughter as the performers playfully writhed around. Working with paint, a medium they were unfamiliar with, it was easiest to relate to the dancers explorations in this last performance and I imagine the remaining imprint in the gallery would similarly convey the exuberance of the experience for performers and audience alike.

The metal grids utilised in the first two performances brought to mind the frame of modernism as the performers moved around and within them, but these were also physical limitations and more aptly contributed to the loose narrative of gradual liberation from societal constructs. As in the 1974 performance, each part was videoed and replayed on monitors in the space. The cameraman was conspicuous throughout, the footage accumulated over the series and this divided the attention of the audience between documentation and action, highlighting both aspects of temporality and spectatorship.

Also held during the opening weekend was a panel discussion that fleshed out the specific connections between the artists, expanding on certain details and meeting points that do not surface as readily in the exhibition. Curnow suggested that although all three artists attempt to evoke a sensory response, Oiticica and Allen demand active audience interaction whereas Lye’s work renders spectators more passive. A discussion on theatricality, empathy and freedom ensued, with Tony Green drawing a distinction between the artist-as-performer model and Allen’s use of performers in Contact, reaffirming the importance of self-reflexive observation for this work.

Though I appreciated the clarity and simplicity of the exhibition, I would have enjoyed seeing the nuances of the connections described in more detail in the show. Perhaps Allen’s own legacy could have featured more prominently too. It is well known that Allen played a crucial role as head of the sculpture department of Elam and I was keen to see some of his students’ sculptural work in addition to the documentary photographs. Maybe even some current examples could have been incorporated to reveal how the critical shifts of the 1970s are still playing out in contemporary practices. Regardless, Points of Contact is a thoughtful and significant exhibition. In particular, the Contact performance was a monumental event and its message as relevant for our contemporary condition as it was nearly forty years ago. 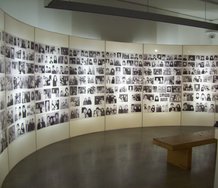 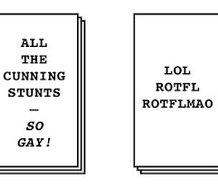 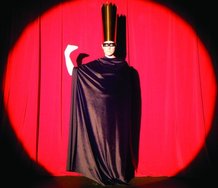