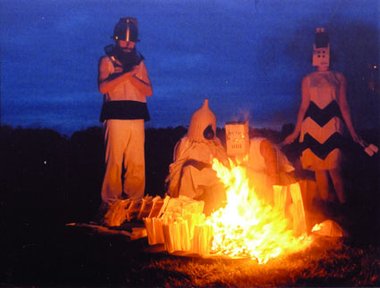 While their art is entertaining and absorbing in the 'documentary' it is not in the three films, which record ritualistic outdoor performances. These activities may be good to watch live or participate in but they become tiresome on film: akin to amateurish home movies. Exhaustingly never-ending for impatient people like me, but maybe rivetting for a saintly few.

Pil and Galia Kollectiv are an Israeli art couple now based in London (Kollectiv is their surname) who re-examine early modernism through quite complex ‘retro’ collages, sculpture, films and performances. These usually involve teams of volunteer actors and deliberately crudely made costumes. They often reference Russian Constructivist and Bauhaus design motifs.

The Kollectivs have two quite different moving image works at Te Tuhi. One is a 23 minute long series of b/w stills appropriated from the photographic archive of a computer company made into a pseudo documentary that is cleverly written and edited with a brilliant ‘BBC’ voiceover. The other is a much longer series of 8 and 16 mm films transferred to video, films of three performances they have organised and which altogether run in a strict sequence for about 48 minutes.

The first work, Co-Operative Explanatory Capabilities in Organizational Design and Personnel Management (2010) uses a slide sequence of slides from the late sixties to revel in satire, lampooning the attempts of management within an engineering firm in Leyland to find methods of increasing worker productivity. They use empirical methods of 24/7 observation and two Alpha and Beta teams - the latter secretly collecting data on the former. Here is a sample of the doco.

In the process of observation the behaviour patterns of the observed office employees get stranger and stranger and gradually the presence of a bizarre religious cult becomes apparent. Religion and its parallel social phenomenon, art, are regular topics for these artists, but in the other three films, which record ritualistic outdoor performances, the mood is much more serious. There is no voice over, only incessantly driving music.

The Future For Less, the first of these (they move from screen to screen on three walls in the largest Te Tuhi gallery - a square room) looks at a riot that occurred at an IKEA store in London five years ago when people fought over discounted sofas and sixteen shoppers were injured. It imagines that the state has imposed new laws of High Modernism on the masses and so with the components of their IKEA kitset furniture, they are compelled to build avant-garde sculpture.

The second film, Better Future, Wolf Shaped, is set on the moors in Cornwall with ancient Celtic sites as a backdrop. A rebelliously deviant cult that is anti-modernist, builds and sacrifices architectural models made of cornhusks, while cavorting around in IKEA salad bowl and lampshade headgear. They dance out bizarre linear configurations, patterns that reference works by Bruce Nauman and Samuel Beckett. Such images seem like rejected footage from The Wizard of Oz or some other old film from the thirties.

The last movie, The Future, returns to the site of the original IKEA fracas when a lone insurgent is chased by state agents as she tries to rustle up support for an uprising. The rebel group dances out gesticulating movements based on the original violent conflict, and then finally with other revolutionaries, the original insurgent confronts the police to form a frozen tableau as a new utopia is about to dawn.

These activities may in fact have been good to watch live or participate in but they become tiresome on film: akin to amateurish home movies. Exhaustingly never-ending for impatient people like me, but maybe rivetting for a saintly few. The films, because they record another medium (choreographed performance) and are not reflexive in any way, don’t excite through properties of their own. There is very little editing or rhythmic visual structure, though Les Georges Lenigrad provide continuous background music. Pil and Galia Kollectiv obviously like writing early modernist narratives that blend ersatz religious ritual, art-historically coded choreography and neo avant-gardist clothing - depicting their imagined revivalist cults.

The mocumentary slide sequence of the peculiar Leyland workers is for my money the work here to spend time with. It lacks the dreary earnestness and incongruous haminess that accompanies the absurd rituals in the films, having a lightness of touch and mischievousness that keeps you hooked. The two rooms of work by these artists seem at cross purposes: one with irony, the other without. Maybe others will think they more similar than I give credit for. That they both are humorous and intended to be silly (but clever). I can’t see it.