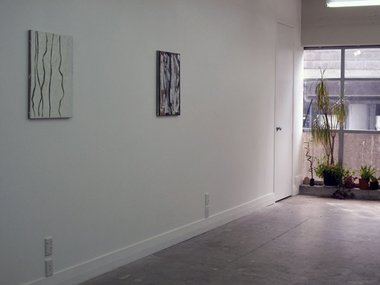 Such a sequence is a bit like a line of four played dominoes with paired up numbers touching end to end, but far less obvious. The pleasure in the work is oddly not in beholding the canvases individually, but in contemplating that strange mentally floating zone where common qualities are compared between them, the result of somehow being mysteriously conveyed within an imaginary conduit from one to the other.

The four paintings that Sam Rountree-Williams presents here come from a recent period in his working life when he was studying at the Dusseldorf Academy, and it seems his practice has changed. Although when you look at the photographs online here the works look strangely like a commentary on the RM architecture and objects (like plants) in the room, that is either mere coincidence or the artist has cunningly picked from a large pool of paintings some especially apt to RM’s ambience. These paintings actually work best as one painting - not four separate pictures - but as a single painting divided up by palpable floor and wall space, where you move between the four separated elements in a sequence.

As separate components they by themselves are usually quite uninteresting, for the marks and shapes often are not well spatially integrated or particularly seductive - as application conventions go. This seems deliberate. You attend to the various overlaid systems of marks in each because of what they speak to other works, particularly those before and after in the series.

To do this you move in an anti-clockwise direction from the window on the lefthand side of the front desk, down the wall towards the door, across the floor to the far wall, then back to the window on the righthand side of the desk. As a group the interest in logic and series has a vaguely Jasper Johnslike feel to it, despite the apparent rawness of Rountree-Williams’ paint handling.

Rountree’s first work has green and pink underlayered paint being exposed by darker covering colour being wiped off in horizontal strokes with a brush handle - so that a very rough wonky grid is formed underneath. There is one added red vertical line, and on top are groups of quickly made white vertical brushmarks of varied consistency - some touching, others in isolation.

The second work, with wiggling green vertical lines, uses those lines to allude to the vertical gaps between the white clusters in the first. The contours are not exact replications but there are sufficient commonalities to see that a correlation is intended. The pale white paint under the green lines of the second work is subtly imprinted with newsprint text where the ink from a German newspaper has been pressed into the oil. Something de Kooning used to do.

Rountree-Williams’ transferral of ink from a publication continues in the third work, for it is found in the main applied blocks of white (not layered underpainting). These rectangles allude to grids that are not precisely aligned, but with gaps between vertical yellow border lines and white and orange oblongs, that expose an agitated underpainting scraped away with fingers and brushhandles.

This same underpainting is more dominant in the fourth painting, one that is square, not a vertical rectangle, and which has six, precisely executed oblongs, again deliberately misaligned and slightly misangled. One pair is of dense red, another of thin blue and the last couple a very thin white: all loosely positioned so they are not touching or tightly butted - and thus referencing the third, much ‘rougher’ work before it.

Such a sequence is a bit like a line of four played dominoes with paired up numbers touching end to end, but far less obvious. The pleasure in the work is oddly not in beholding the canvases individually, but in contemplating that strange mentally floating zone where common qualities are compared between them, the result of being somehow mysteriously conveyed within an imaginary conduit - from one to the other.