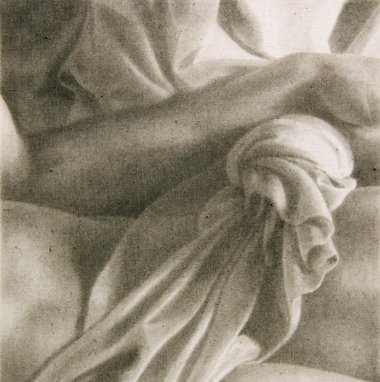 That it works is testament to the respect the artist shows towards a frugal schema, to the power of controlled dexterity across two and three dimensions and an adherence to a slightly customised version of the meaning of less in ‘less is more'. There is also the small but significant issue of a blissful indifference to the old artistic barricades insufficiently guarded by the likes of this correspondent.

For every gap that exists between supposedly irreconcilable visual languages in art there seems to be at least one artist somewhere beavering away at joining the dots. Participatory communities, alterity and the daguerreotype: fictive textual sound bytes, conceptualism and the tweet; extreme body art, forestry policy and the ethereal impulse; no matter how hard the act of reconciliation - or at least vague alignment - someone in a studio, bedroom or gallery is on to it.

Artists love nothing more than to bring together idioms that were never supposed to go together and the pleasure factor is only multiplied if said forms or languages are seen to be somehow sworn ideological adversaries. But the real slam dunk delight is when the bringing together of something like minimalism, with renaissance-style finely-wrought figurative painting in the same show pricks the skin of anyone old enough to be certain that this combination is just plain wrong.

Part of the cleverness of John Ward Knox’s first show at Robert Heald Gallery is that not only has he shaken conventional artistic demarcations (minimalism, sixteenth century style figuration) he has separated the young and irascible - who do not blink from such a programme - with the old fogies like this writer that do.

It would be much easier of course if the combination was as risible in actuality as it is on paper but this is demonstrably not the case. There are six works in the show, two of Knox’s delicate wire and chain corner sculptures and four meticulously crafted monochrome paintings that copy details of Michelangelo’s camp Pieta. While they appear to be two completely different bodies of work in nearly every respect, all of the components are united under the moniker No Title with only the different dates of production separating them from one another. By labelling the works in this way, the artist prefaces each one as part of a broader programme across an idiosyncratic continuum.

While the differences at first scream loud and might be crassly described as ‘less is more’ colliding with a visual cornucopia of guild-like craftsmanship and mark making, a closer inspection over time reveals some interesting alignments. In both ‘bodies of work’ there is a particularly heightened sense of touch and delicacy in the way the objects and paintings are constructed. Information and form is stripped back in both modes so that an emphasis is placed on a gesture whether it be a line in space or the tension of Jesus’ lifeless hand. There is also an absence of colour across the work beyond the utilitarian metal of the sculptural reliefs and the dirty sepia uniformly applied to each canvas. Furthermore, the paintings while figurative, also nod to non-representation through the use of the square as a device. The finely honed details of the Pieta (hands, face, arm) occupy only a small square in the centre of the canvas. Beyond this is a larger square of pristine canvas suggestive of a rough-hewn Joseph Albers.

What becomes increasingly clear is that the artist applies a reductive programme equally across the work not to distil an essence so much as to find the point at which a fragment says something more interesting than the seemingly complex whole. That Ward Knox employs such radically different genres as Renaissance painting and minimalism across centuries is on one level misleading for they are in his schema languages to be investigated and deconstructed more than ideological frameworks that require partisan positioning. They function as matrixes or formal systems from which the artist continually shaves off superfluous layers of information until the final forms are left in a state of elegant incompleteness.

There is some serious chutzpah at work here, a confidence that the heavily contested field of art history will not cloud the artist’s quiet, yet focused, programme of audacious cultural mash-up. Robert Morris went from Minimalism to highly emotive figurative forms as well but this shift was neither successful (even Morris has tried to bury this period of his work) nor did it occur within one body of work but over a number of years. This is a complex enterprise to get right, as Ward Knox does not want to risk being the blissfully unaware artist mixing and matching with the gay abandon of my seven-year-old daughter’s wardrobe manoeuvres.

That it works is testament to the respect the artist shows towards a frugal schema, to the power of controlled dexterity across two and three dimensions and an adherence to a slightly customised version of the meaning of less in ‘less is more’. There is also the small but significant issue of a blissful indifference to the old artistic barricades insufficiently guarded by the likes of this correspondent.