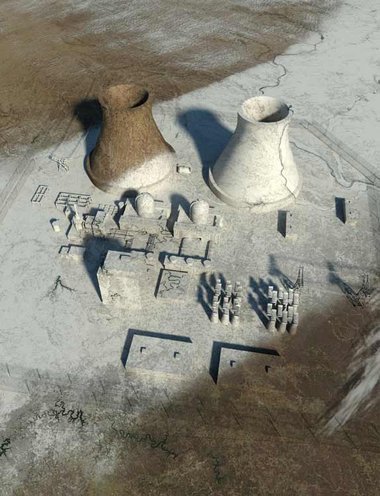 Yet the sense of Bunkley's work being in between things is also for me its problem. This exhibition is full of deft ideas but they're often awkward and stilted in final delivery. It's as if no one of many ideas has been taken through to full completion.

The wide array of media and approaches Brit Bunkley takes to this exhibition gives it the eye-popping art entertainment factor of a surrealist funfair. But as its title suggests it’s a funfair foggy with the dense air of both laughter and political paranoia.

Be it smashed up gnomes congealed in square boxes of resin, a television set made out of brick, or digitally created landscape collage prints Bunkley comes across first and foremost as a sculptor. The work shows a constant interest in the flipping between two and three dimensions, the inconsistent edges of things and the illusion of weight and bulk. There’s a pervasive awkward, edgy feeling to the work that resists elegance and tidiness. Time and sculptural space are in the process of collapsing, with the edges blurring between simulation and fiction, maps and forms.

Fear about our domestic numbness to the effect of global political, military and economic power on our environment runs through the show. The installation in the gallery could be a living room. A living space where everything from the pictures on the wall to a computer and printer become tiled, bricked or melted from the ornamental into new, anxious hallucinatory forms.

A lampstand, for example, resembles a mushroom cloud. Perhaps the exhibition’s strongest work, it is rather tellingly, made of marble and made in China from a digital 3D print. The television set suggests rather bluntly that the media bricks us in, whilst a sculptural cast of a head, embossed with daisy patterns like an ice cream cone, and propped out of steel arm in a vice, hints at social engineering. Bunkley comes off as a restless obsessive outsider, trying out a variety of sculptural strategies to disrupt the smooth synthetic surface the world is moulded into.

The exhibition’s skittish paranoid aesthetic can feel like it’s from a different time - the postmodern late 1980s, with its fragmentary, politicised, distressed surfaces and reaction against utopianism. A time when in New Zealand we were living more consciously with the fear of nuclear devastation, and rubbing up against American military and industrial power. Yet, it’s surprising there aren’t more artists like this in New Zealand concerned with the way global mechanisms contaminate our landscapes and gather like apocalyptic storm clouds over our heads.

A New Yorker with a background in public sculpture, Bunkley shifted to Wanganui to teach in the 1990s. That huge shift still feels reflected in his work. Its providence is an in-between place, between public and private spheres, between dimensions and media, and between America and here. Bunkley’s is a bird eye’s view, as if he’s hovering over the North Island looking down and then out like a paranoid drone.

All of this I write about makes the work interesting, if not fully resolved. Even more so because Bunkley embraces elements not seen enough elsewhere in New Zealand art. Beyond the likes of Hye Rim Lee and Richard Killeen the digital realm is underexplored - particularly the interest here in the trompe l’oeil like decorative illusions of digital surface, and the complex tension it can create between different spatial dimensions. Also distinctive is the way Bunkley is prepared to embrace a wider political perspective beyond the personal - which itself feels very American.

Yet the sense of Bunkley’s work being in between things is also for me its problem. This exhibition is full of deft ideas but they’re often awkward and stilted in final delivery. It’s as if no one of many ideas has been taken through to full completion. The encased fractured garden gnomes at the front of the gallery are comically eyecatching, but beyond their immediate symbolism as both ornamental jesters and mystical connectors to the environment really don’t engage me. Like the television set they’re working as neat, telling icons but not more deeply as art.

The most promising aspects of the show are contained in the digital prints, with their overhead views of 2D topography meeting 3D models and interesting, strong plays with digital collage and scale, but they never feel completely resolved.

An enormous cow stands upon a landscape photographed from above the clouds, an elbow of the river licking over its back. Entitled China Cow it’s a strong symbol for the global commodification of landscape, yet like the other prints here feels like just one stage set still from a larger animated work.

The Springfield Nuclear Plant image is rather clever for its 3D recreation of The Simpsons landmark, with rivers or cracks mapped onto its smoke stacks, and fear-laden ash and brown colouration (again wit and worry go hand in hand). Yet it feels like a working drawing towards a larger work. The tension between providing objects for purchase in a dealer gallery and public aspirations for art feels apparent here - like there’s a bigger more complete project we’re not privy to because of compromises that have had to be made.

I liked this work. Mark Amery admits that they are Icons, but not “art”? I find that this is a ...

I never heard of him either until this show. It seems that Mark’s overriding theme here is that the work ...

I'd never heard of this artist before but this well-written review has piqued my interest. Looking forward to seeing what ...

I'd never heard of this artist before but this well-written review has piqued my interest. Looking forward to seeing what Bunkley comes up with next.

I never heard of him either until this show. It seems that Mark’s overriding theme here is that the work is interesting but does not go far enough. It is not “resolved”. For me some work was unresolved, other not at all. One wonders what the best resolution would be for Mr. Amery. Resolution in art (unlike science) is in the eye of the beholder, so we must look at this review through the eyes of one by the sort of work he feel is “resolved”. Mr. Armey’s eye seems to see abstractions or 80’s style cartoon expressive painting as the most from what I have read of his reviews. For the artist’s point of view I found his interview interesting: http://marynewtongallery.blogspot.com/.

I liked this work. Mark Amery admits that they are Icons, but not “art”? I find that this is a pretty harsh and uninfomred comment coming from someone who upholds the cheesy 80’s style faces of Gavin Hurley (real 80's art) and the stilted formalism and contrived content of the Tukutuku Lightboxes.