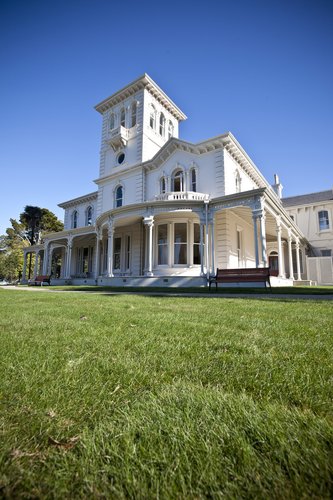 This shambles is depressing, and one would be amused by Wallace's pigheadedness if his lack of concern about presentation were not so insulting to the artists. However one can't deny two things. Firstly it is fantastic that James Wallace loves art and enthusiastically purchases it. A lot of it. Secondly, though the presentation of his collection and the Awards is horrific, his project is immensely valuable as a form of art education - it gives a new audience an introductory taste.

There has been a flurry of media attention devoted to the TSB Wallace Arts Centre as a new public cultural amenity for the citizens of Auckland, with some articles even suggesting it is a rival to the (currently being revamped) Auckland Art Gallery. And indeed the Pah Homestead (and surrounding Monté Cecilia Park) is a gorgeous and fascinating place to visit in its own right. Wondrously elegant, and radiantly - almost heavenly - white, this ornate Italianate mansion was built in the late eighteen seventies for Auckland businessman James Williamson and designed by architect Edward Mahoney.

While the restored building looks sensational, the hang of the contemporary art inside it is not happy. Actually, it’s a disaster. There is far too much art crammed into rooms that seem disappointingly small. The presentation is abundant with insensitive juxtapositions where works that would be amiable in isolation now throttle each other when forced into excessively close, unneighbourly, proximity.

Yet that it looks so dreadful should be no surprise. As the title says, this is James Wallace’s nineteenth annual award, and he has a way of doing things, a cluttered look that he obviously likes. This show is consistent with the taste indicated by the eighteen other earlier ones, so obviously if you come here to find ‘wheat’, you need to be prepared to sift through a whole lot of strewn around ‘chaff.’ Then once you’ve found it, you will need to try to not mentally haemorrhage as you endeavour to imagine how good that art might look by itself.

This shambles is depressing, and one would be amused by Wallace’s resolute pigheadedness if his lack of concern about presentation were not so insulting to the artists. However one can’t deny two things. Firstly it is fantastic that James Wallace loves art and enthusiastically purchases it. A lot of it. Patrons like him are extremely rare in the art community and sorely needed. Secondly, though the presentation of his Collection and the Awards is horrific, his project is immensely valuable as a form of art education - it gives a new audience an introductory taste. It reaches a public normally terrified of art museums. They will flock to his Arts Centre and I guess snooty ‘aesthetic types’ like myself will stay away, finding the shows too visually indigestible to bother with.

I also respect the fact that Wallace’s choice of art reflects the fact he likes the pleasures of the senses (as surprisingly does much so-called ‘dematerialised’ conceptualism) and this love of formal properties such as colour, pattern, shape etc is devoid of any dour puritanism. My gripe is about the quality of the results and the confusing density of the layout. The odd thing is the exhibitions could succeed if there were just one or two works in each room, or maybe no paintings at all in the building (pristine modernist white cubes, not homesteads, suit paintings) and videos there instead - spread apart to avoid audio overlap.

That’s the visiting experience… so what about the actual Awards?

There are seven of them, of various cash prizes and overseas residencies. Over $150,000 worth. Allocated to various winning entrants by a panel of three painters: Philip Trusttum, Sara Hughes, and Peter Gibson-Smith.

It might be argued that Wallace should use a panel of critics (i.e. professional curators) to do the allocating of prizes, not three practitioners, but these artists are smart and articulate, and though some of their winners are not whom I would pick, they don’t make me want to retch either. Nothing they decided makes me indignant, and I am not confident a team of curators from the institutions could do any better.

The prizes are wonderful. Three involve residencies in the U.S. and a fourth is in Switzerland, and each year the event generates a lot of excitement.

My favourite work by a 2010 prize winner is the sculpture by Glen Hayward that consists of four hand-carved surveillance cameras. They are in a class of their own in this context because most people won’t recognise them as art. They are sneaky because they play havoc with what art is supposed to be in such a venue, protecting themselves by virtue of reverse camouflage. A good example of attacking being the best form of defence. Scaring thieves (or nosey critics) away before they can look too closely.