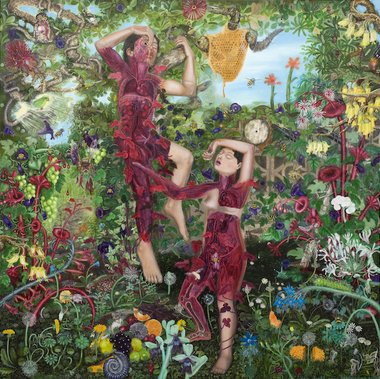 Wilkinson is not some kind of morose killjoy, for there is a lot of wicked humour within this overarching theme, and he loves to set up narratives that viewers can organise and piece together in their own unique way, extrapolating from details. The models are like film sets for Wilkinson Productions - creating variations of Film Noir, war movies, urban grunge, global politics, sci-fi, Bible stories - even Gulliver's travels.

Brendon Wilkinson’s time-fixated ‘realist’ sculpture first attracted public attention in the late nineties for their intricacy, thoughtfulness and humour, consequently he has been known to all our key collecting institutions for some time. Oddly however this current show is the first substantial survey of his sculptures and paintings, one first prepared for Aratoi, the Wairarapa Museum of Art and History in Masterton, by the artist and his dealer, and then modified and augmented by Stephen Cleland (Te Tuhi’s curator) for this larger Te Tuhi version.

Here we can see nine of his model-based sculptures, six oil paintings and four large watercolours. Perhaps that doesn’t sound like many but this is a display you can spend a lot of time with and still plan to make one more return visit. The work is complex, much layered in its imagery, and full of surprises within its incessant detail - some of which is accurate in its replication of certain buildings and their sites, and some of which is improvised and fanciful.

If there is a pervading moral theme in Wilkinson’s practice it is slightly Dutch Still Lifeish or Vedic in mood - and proclaims: don’t be seduced by beautiful bodies or wondrously designed buldings; nothing lasts long, soon everything becomes dilapidated, collapses and decays.

Everywhere you look you see graffiti and disintegration on the walls of modernist architecture, railway sidings, airfields and military bases, and within cross-sections of human bodies - or tiny figures split asunder - bones that will soon ache, viscera that will soon ulcerate and leak.

Yet Wilkinson is not some kind of finger-wagging, controlling, morose killjoy. There is a lot of wicked humour within this overarching theme and he loves to set up narratives that viewers can participate in, organise and piece together in their own unique way, extrapolating from details. The models are like film sets for Wilkinson Productions - creating variations of Film Noir, war movies, urban grunge, global politics, sci-fi, Bible stories - even Gulliver’s travels.

One finely speckled, turbulent and twisting image, Chill Blade, seems to be a feral hybrid between Francis Bacon and H. R. Giger - machine parts blended with living flesh, flailing metallic tentacles and showering white sparks. Its asymmetry blends drama with a lurching and wild freneticism. Other works are symmetrical and succeed because of that balance, exuding totemic, talismanic qualities with vertically stacked skull, fur and claw, again juxtaposed with glistening winglike machine parts and spiralling cat’s eyes that double as moth wings.

The interesting thing is that Wilkinson’s sculptures, for all their humour and obsessive passion, still have a pervading, somewhat clinical academic coolness, while the big paintings are just the opposite. They create an immensely physical and emotional response in the viewer. It is as if they see you walk into the gallery, eye you up and attack - to set you reeling. It might be their height that causes this, plus their nightmarish ‘pupils’. They mentally dominate.

With these 2D images it is the crammed overloaded detail that is fascinating. The way Wilkinson prods the viewer to create connections, to devise their own narratives and context, like more a songwriter than a novelist - using a few words not a lot. Yet those chosen details are haunting. With one black, white and grey painting of a modernist apartment block, the row of receding balconied towers is never ending, continuing on to infinity as does a hilariously long, water-filled swimming pool at its side. In another work, a sculpture built on a fake branch we see a ferocious conflict: a small green bird with yellow moth patterns on the undersides of its wings, is tearing the claw off a scorpion which still succeeds in stinging it in the brain.

Violent horror and black humour therefore co-exist happily in Wilkinson’s universe. Within the colourful painting Internal Surface Honey Eaters, we see what appear to be Adam and Eve climbing a tree in an Edenic garden to raid a honeycomb. Eve is ‘visible’ to us - perhaps to a vengeful God also - her innards exposed, and part of that detail is a fluffy bumble bee wiggling head-first up her vagina. In a tree near to her companion who has a bleeding left eye, we see a sweet little owl holding in its beak a human eye ball with ganglion. Wild creatures interconnect with living human bodies in Wilkinson’s inimitable fashion but the rationale - the overall conceptual structure - is left for each viewer to make up for themselves.

This is a thrilling exhibition and Aucklanders are extremely lucky to be given the chance to explore it. Treat yourself a visit to Pakuranga. You won’t regret it.