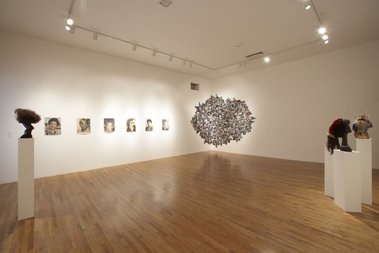 It's unfair of course to put New York art in June under the critical microscope as it mostly has all the rigour of a New Zealand Christmas group show. Art is a seasonal activity after all and summer the time when museums, project spaces and dealers operate in tandem to provide their own carefully tailored filler until the serious stuff begins in autumn.

The best thing you can say about summer art in New York is that the soft shell crab is really very good. New York Noodletown’s version was perfectly realised with just the right amount of crunch and that sweet crab sensation always at the front of the palatte. Trying to pull together some thoughts on the silly season in New York where gallerists are either heading to the Hamptons or are in Basel, I find myself drifting away from the mostly tepid shows in Chelsea and the Lower East side and towards other baser imperatives like which pizza best embodied the platonic ideal of tomato, cheese and perfect crust. (For the record Tottonos in Coney Island got the gong). It’s unfair of course to put New York art in June under the critical microscope as it mostly has all the rigour of a New Zealand Christmas group show. Art is a seasonal activity after all and summer the time when museums, project spaces and dealers operate in tandem to provide their own carefully tailored filler until the serious stuff begins in autumn.

Yet in attempting to bury the critical radar and suspend judgement, there was a constant nagging about the state of play. Rightly or wrongly there is the sense that the diversity that has often characterised New York has morphed post global financial crisis into an anodyne sameness that permeates almost everything from experimental spaces in Bushwick through to the New Museum. The later is fast becoming my most disliked space period with its repetitively lame curatorial swagger and Ikea aesthetic, churning out safely packaged product. The New Museum seems like a one-hour diversion for moneyed downtowners to keep their credit cards cooled in between purchases in Soho. The Jeff Koons curated show Skin Fruit which consisted of works selected by the artist from the Dakis Joannou collection was pretty much a by the book excursion into what we would expect Koons to like. Lots of naughty body stuff with a predilection for figurative sculpture. It’s not that the show was bad but just that it was not especially challenging or thought provoking. I could not help feeling that if anyone was asked to choose works Koons might like, the chances are they would have come up with pretty much the same selection. No nasty (interesting) surprises here.

The New Museum feels like it is run by a PR firm that slavishly worships the cult of accessibility (The Museum as Hub) while trying to cling to its credible roots as an edgy project museum on Broadway. Maybe I am just tragically nostalgic for founding director Marcia Tucker’s vision of a downtown experimental museum where the art is more important than the ambience.

PS1 in Queens is MoMa’s attempt to stay committed to contemporary art without having to clutter the midtown venue with stuff that might frighten the tourists or more to the point, the trustees. Its current showing, Greater New York, was the hyped show in town drawing together a survey of what is purported to be the latest tenets of art produced in the five boroughs. That it only happens every five years gives it a sort of Documenta-like mystique even if its geographical parameters are even more limited than the Whitney Biennale. The current iteration was mostly very solid with a number of excellent works by younger artists including Ryan McNamara and Liz Magic Laser. McNamara’s diptych projection of him re-staging a surprisingly precise drunken dancing routine in a disco and also in a rural setting was immensely watchable and clever in its investigation of physical precision and entropy. Likewise Magic Laser’s Mine where the artist employed robotic medical lasers to dissect the contents of her purse was a highly acute study of the act of making and marking linking precise miniaturised actions with the prying mechanisms of global travel security.

If there was a dominant paradigm it was the profusion of what might be described as slacker combines: an amalgam of mundane sculptural materials fused with a lot of gestural paint splattering to form excessive tableaux of various kinds. The influence of Rauschenburg, and 80s gestural painting combined with arte povera is clearly big in the studios of Brooklyn right now. The work opens up a not entirely new front of expressionist practice that challenges the dominance of idea-based and irony infused art. This neo-zeitgeist language for Gen Y bricoleurs is interesting as a phenomena but in Greater New York less so as art.

Maybe this work ultimately is the logical outcome of having been exposed ad finitum to a steady diet of blue chip 80s art in Chelsea over the last few years. Post financial meltdown Chelsea has got increasingly bloated and top 40 while the Lower East Side - decimated by closures - has lost a good deal of its edge. If the scene keeps pushing East from Williamsburg to Bushwick and beyond or just as likely West to low rent Kansas City or no rent Detroit, New York will still continue to be a centre for the exhibition of art. But the jury is out as to whether NYC can retain the necessary community spirit and critical dialogue to foster the production of consistently good art. On the basis of this jaunt, the consistent quality of the soft shell crab would appear to be a safer bet.