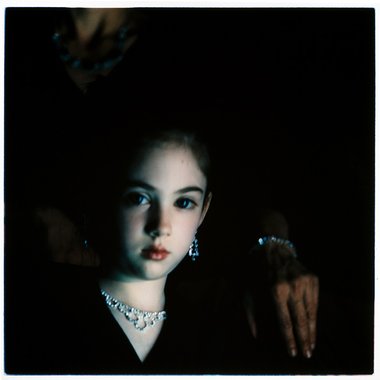 On the girl's left shoulder, balancing her glowing visage on the other side, is an elderly woman's hand, and you can just detect the owner's aristocratic grandmother's neck in the murky background. The hand means more than simple guidance. It implies tighter control, a form of matriarchal manipulation that is perpetuated over dynasties. The image's examination of privilege and power has links to Italian film makers like Luchino Visconti.

In this very fine small group show put together by Ivan Anthony the placement of the assorted works seem to function perfectly. There are some nice surprises, an odd intimacy - even with the largish works.

Some of the works feature an understated terror, an expression with piercing eyes of something unspeakable, an intense foreboding. In the room first off the corridor is a wall displaying Kushana Bush, Brendon Wilkinson, Tanja Nola and Jason Greig.

Kushana Bush is an exception to the overall mood. She is a great humourist, mixing campy vaudeville with pornography and Persian miniatures. She likes stagy Song-and-Dance routines with semi-clad (male?) figures lined up in a row, every pubic hair and saggy crevice carefully positioned, every nose a-bleeding, and every tiny blowfly a hovering spectator. Intimate orifices are even shuffled around - teasing you as punishment for being so dull in wondering what the gender of individual performers might be.

Between Bush and a gloweringly gothic Jason Greig is a tight arrangement of three works that are especially sinister. Next to a small Todd of a wavy haired brunette with prominent forehead and alarmingly penetrating gaze is a small double exposed Tanja Nola photograph of a genderless, intensely hostile face floating in a swirling cloud of dusty ash particles.

In the second room on the main wall is a sensational, ornately framed, photograph Bill Henson made for his 1991 Paris Opera Series, showing what looks like an eight year girl bedecked in family jewellery for a formal portrait. On her left shoulder, balancing her glowing visage on the other side, is an elderly woman’s hand, and you can just detect the owner’s aristocratic grandmother’s neck in the murky background. The hand means more than simple guidance. It implies tight control, a form of matriarchal manipulation that is perpetuated over dynasties. The image’s examination of privilege and power has links to Italian film makers like Luchino Visconti.

The other stand-out in my view is the well known Yvonne Todd image of an impeccably dressed woman with her face obliterated by shadow, standing behind a scowling little girl in a wheelchair. There is a similar scene in Alfred Hitchcock’s Marnie where Marnie’s mother, an ex-prostitute (played by Louise Latham) stands talking in a doorway with her face also totally obscured by shadow. There is an extraordinary power in Todd’s version of this confronting image, an eroticism coming from the mysterious observing blonde coolly presenting the incapacitated feral child as a threat. It’s some sort of subtly menacing vagina dentata motif.

Not as compelling as these, but still intriguing, is an Andrew McLeod photocopy print of a collaged and drawn over photograph of the Prado. From the rubble-strewn interior it looks as if it was taken after a bomb blast. It seems to be a comment on the social and physical vulnerability of national art collecting institutions, that such internationally esteemed treasure houses can never be confidently secure.