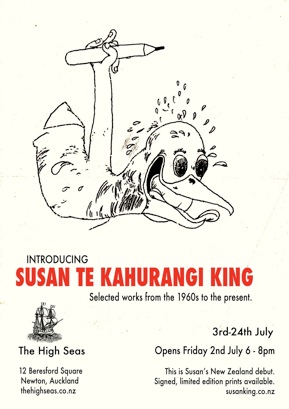 Though some claim these drawings indicate deep thought and interpretation, it is difficult to substantiate such notions, though they certainly are accomplished. We don't understand enough about what causes the pleasure of their making (assuming that is the case) or the motivations behind the channelling of the necessary creative energy to know whether they are profound or not, or if we are projecting interpretative fantasies of our own.

We have here a fascinating exhibition by ‘Outsider’ artist Susan King in this Newton gallery - mainly pencil and biro drawings that she has been obsessively making on a daily level for several decades, ever since she was a preschooler. She is nearly sixty, and apparently did stop for twenty-three years, but now she has restarted, using strong colour - something that never interested her earlier. Have a look at her family run website, and you’ll see that they are similar to the work by other artists in the ‘Outsider’ (Roger Cardinal’s pioneering term) or ‘Art Brut’ (Jean Dubuffet’s name) genre, image producers who often work compulsively while in institutional care for their various mental disabilities. Scottie Wilson, Henry Darger, Madge Gill and Adolf Wolfli are the most famous examples.

The original pencil works displayed, mostly framed and under glass, are quite special in their use of entangled and undulating, freefalling, spilling rhythm. There is an ad hoc quality to some in the way they seem to have been finished abruptly, or had slightly discordant colours added in isolated corners. Others though are beautifully resolved, and dense with detail in the form of spiralling little bars, sinewy pulsing waves, and spiky vegetative forms of intense colour. Often cartoon animals from Disney and Warner Brothers dominate their tumbling, whimsical, highly inventive compositions.

Some are unnervingly similar to early Bill Hammond drawings - domestic scenes of suburban neurosis - but possibly even more intense in their twisted over, angular physiognomies.

Though a caption in this article claims these drawings indicate deep thought and interpretation, it is difficult to substantiate such notions, though the unpremeditated images (of which they all seem to be) certainly are accomplished through having a sense of compelling resolve. We don’t understand enough about what causes the pleasure of their making (assuming that is the case - for she never speaks) or the motivations behind the channelling of the required creative energy, to know whether they are profound or not, or if we are projecting interpretative fantasies of our own.

However the twenty or so loaned unique works here are well worth a visit. While there are Giclee reproductions of the individual items for sale at the desk for cheap prices, their colours and feel are quite inaccurate and deserve to be ignored. It is the original pencil and biro drawings that repay spending quality time with.