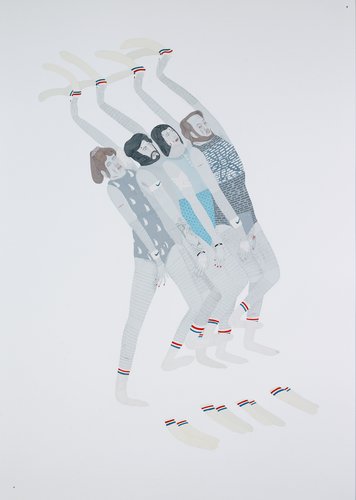 The magpie appropriation of diverse cultural elements so prevalent in contemporary painting is more grounded in Bush's work here than most. Bush employs strong almost musical arrangements, expressionistic emotion and physical movement on an empty background. As figures semaphore in unison, with socks as hand puppets in the air, or their leotard cradled scrotums move together as one, they can be as laugh out loud funny as they are physically uncomfortable.

In Ready to Roll Kushana Bush and Zina Swanson demonstrate that works on paper can quietly hold their own alongside the eye candy of grand installations, paintings and flickering video. Dunedin’s Brett McDowell Gallery also did this rather effectively with Bush’s work at the 2009 Auckland Art Fair. In a sea of motley media he devoted his stall to her distinctive gouache and pencil drawings of clusters of expressive figures.

In the selection at City Gallery from Bush’s Modern Semaphore series the figures are like some brilliant misfit Olympic team of hammy actors. They are engaged in carefully choreographed, synchronised but ludicrous routines, each driven by nakedly exposed repressed sexual or political anger. Bush manages to make each figure utterly idiosyncratic yet exquisitely tailored to form part of an intricate pattern of lines, dashes, colours and textures.

With both dark disquiet and devilish wit, the works play on the demands for us to get in step with the group. Together as a wave the figures gracefully create flags, but we are aware of the pasty ungainliness and pain of each, their teeth expressively, grotesquely bared. Plays with pattern are made out of surprising symbolic elements: from the Nike swash to an abundance of sticking plasters and tissue - the latter waving in unison out of bloodied noses, like little white flags involuntarily calling for a ceasefire.

Taking a lead from Asian figurative painting traditions, the works can be read from a distance as strong abstract arrangements, but then draw us into an intimate web of cultural and psychological commentary. This ranges from a mix of fashion and hair-styles across many cultures and eras, to the accentuation of our awkward peacock-like display of sexuality.

The magpie appropriation of diverse cultural elements so prevalent in contemporary painting is more grounded in Bush’s work here than most. Bush employs strong almost musical arrangements, expressionistic emotion and physical movement on an empty background. As figures semaphore in unison, with socks as hand puppets in the air, or their leotard cradled scrotums move together as one, they can be as laugh out loud funny as they are physically uncomfortable. They are as much ‘80s dance parodists ‘The Real Hot Bitches’ as a tribal troupe passionately invoking the Gods. All is brought together by strong unifying poetic movements, as reflected in the works’ equally delightful and strong titles, like Pitched End Motion and Blind Elevator Stretch.

Zina Swanson provides both a sculpture and works on paper, but there’s no sense that one is more significant than the other, with her exquisite drawings able to play fantastically with making poetic fragile constructions on the page with lightness and strength. She creates the kind of hybrid assemblages of plant and human body elements that you can imagine Rudolf Steiner and Joseph Beuys approving of - as apparatus to symbolically heal the rift between humankind and nature. Like poetic emblems on life rising from the dead and dismembered, their furniture of containers and appendages bandaged and grafted together, provide vehicles (reminiscent of Heath Robinson) for the circulation of new blood.

Like Bush these works also speak strongly from a distance, floating visually on the white page as emblems. One for example, I took as echoing a diagram of the female reproductive organs. They are also up close full of disquieting little decorative details of blood dripping and new saplings growing, complex visual containers for thoughts on the relationship between nature and culture.

Swanson’s sole sculpture here is more difficult and a little less effective for having to deal for real with the artificial grafting together of disparate materials. But the conversation between natural growth and human construction remains interesting. A tree root sits on marble bathroom tiles, constructed into a half-formed box (the timber prop visible on one site), branches bandaged together to resemble a spider-like root form. Off its top like fungi grow hundreds of red plastic swizzle sticks, some leading to clay human fingers that drip tiny ornamental sprays of red plastic blood. In many respects it feels more like a preparatory work for the drawings than the other way round.

Given better placing, this floor assemblage would speak nicely to Eddie Clemens work, which is round the corner with the Bush. Clemens’ assemblages of found domestic elements are also well chosen for their witty elegant conversations between culture and nature.

Clemens’ clothes racks, covered by beads of glue - evoking their title Morning Dew - sit well alongside his representation of our domestic interaction with fluids in The Fallen. Here water is represented through the nifty kinetic DIY device of a small blower sending ripples of air out under silk, through wine bottles placed in tissue boxes. On the wall nearby, where in this installation you might expect drops of dew also to collect, is Captive, a spider web cape made from pens and the chains that attach them to desks wherever you need to fill in forms. A beautiful bureaucratic trap, it presents up a range of associations amplified by the work’s materials and shape in tandem. In Clemens there is a sculptor picking up poetically with readymade materials where the likes of Bill Culbert might have left off.

As with any survey some artists’ work didn’t engage me as much as others. I found the cool portraiture ideas of Layla Rudneva-Mackay uninvolving and not particularly interesting. The small selection from several bodies of work felt ill-conceived in terms of an introduction to her ideas (see John Hurrell‘s very favourable considerations elsewhere).

Matt Hunt’s selection is also overdue, and it’s great to see a Wellington artist let out of the Hirshfield Gallery. Yet for all the fantastical delights of their hybrid sci-fi pop-religious allegorical worlds these detailed illustrative works, with their flat naive painting style, hold little mystery. As grand paintings they feel rather bombastic and derivative, playing a tired pop art game of scaling ideas up large. Instead the digital world or hand-drawn graphic novels would provide greater opportunity to delve more deeply into the battles between science and belief, entertainment and spirituality as suggested by their characters, with their deadpan quips in speech bubbles and surreal situations.