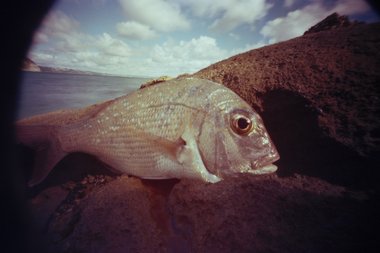 These works are related as images to his mountainous landscapes with their flickering skies. They are not about movement or peculiar gestural marks (like the Frisbee Cams) but compulsively investigate the zone where land and sea overlap so that what is hidden is brought to light. The ocean is a dark chamber from which Glass plucks forms that he then records.

Darren Glass
Every Fish I Caught

Darren Glass is well known and much admired for his hand made pin-hole cameras - often exhibited as sculptures - and innovative (but technically old fashioned) photographs. In this show he presents a series of images, made over a period of 4 and a half years, of various sea fish he has caught with a rod off rocks on east coasst beaches in Northland. He has not documented sea life he has thrown back, only those of sufficient size worthy to be eaten.

At Anna Miles we see 32 out of 200 colour prints, each one an enlargement from the negative and a circle from the pinhole with its upper and lower edges sliced off. There are also two large velvety contact prints, made in black and white, of all the horizontal strips of negative film. Oddly they are more light sensitive than if the film were black and white.

Thinking about the coloured prints, like most New Zealanders I greatly enjoy eating kai moana, but these images disturb me. It’s the mournful bulging eyes and protruding gulping mouths I think, of these air-stranded creatures dying in an alien environs. I’d rather just enjoy the light, the strange streaky sky and the dramatically silhouetted rock forms.

Of Glass’s oeuvre I am especially fond of the abstract linear images made with his airborne Frisbee Cams, and his lines of circular landscapes made with undulating snakelike box-cameras - with multiple pinholes. However the casual humour in the current show, of Glass plonking these fish down on a rock to be recorded and not caring if their head or all their body fits in (as some of these images indicate) does appeal. The autobiographical side (his hobby) is of no interest, nor the obsession, nor the calamitous fact that the sea’s resources overall are rapidly diminishing, but I like the images that result from his long exposure times and scroll-shaped, laminated, wooden container. And the piscine species are surprisingly varied. Even also within each type.

Plus the colour saturation seems to vary according to the weather and time of day, imparting a distinctive mood in chromatic temperature to every image. So while the compositional format is not as unpredictable as say that of the Frisbee Cams, other aspects (like cloud formations) introduce individuality.

These works are related as images to his mountainous landscapes with their flickering skies. They are not about movement or peculiar gestural marks, but compulsively investigate the zone where land and sea overlap so that what is hidden is brought to light. The ocean is a dark chamber from which Glass plucks forms that he then records.