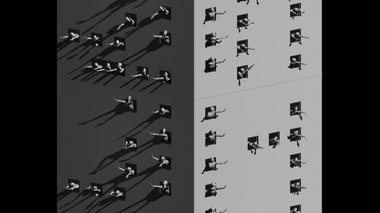 There is lots of de Chirico, Dali and Magritte, but also contemporary art historical figures like Nauman or Alys. The works are savagely satirical, scoffing at human vanity and stupidity, especially mindless repetition and conformity - we feel like Gulliver observing the Lilliputians.

Gregory Bennett’s digital DVDs of scurrying or marching android male figures are well known in Auckland, and lately are becoming more and more accomplished in their demonstration of dramatic theatricality. In this current presentation of five works (four projections, one on two screens) Bennett really knows how to exploit haunting shadows and hauntingly surreal vistas, using only grey, black and the occasional splash of red. There is lots of de Chirico, Dali and Magritte, but also contemporary art historical figures like Nauman or Alys. The works is savagely satirical, scoffing at human vanity and stupidity, especially mindless repetition and conformity - we feel like Gulliver observing the Lilliputians.

Mixed in with this caricature of humans stuck with their individual body tics or limited social circuitry is wonderfully composed choreography and directional ‘camera’ movement. The soldiers, gymnasts or workers perform solo or as groups, weaving in and out of each other’s trajectories, or huddling together or blending to form moving delicate flowers or whirring machine parts. They seem to reference Busby Berkeley, military parades, Karol Armitage, Fritz Lang and the late Merce Cunningham.

In Fall, on one screen groups of figures tumble through deep space like figures in a Magritte painting while on another, a supine solo figure deflates and reinflates itself - or twitches its spread fingers and toes. In Panorama the panning movement is like a horizontal series of frenetic scenes that move from right to left, but in 20 Nights the motion is vertical, revealing groups of robots interacting with Escher-like architecture. In Torsade II the figures are not spread out, except to alternate between circles of striding men that suddenly contract to become sea anemones or writhing heaving baskets.

The best Bennett projects have a mesmerising musicality and haunting humour that you can’t get enough of. This work is profoundly bodily and visual - in the sense of slapstick like Keaton or Tati. The perfectly paced movement and tautly stretched contortion of every coordinated limb, head and torso is extremely expressive, each repeated gestures or mannerisms finely tuned for maximum impact. Bennett’s humour seems to follow in the tradition of brilliant animators like Tex Avery and Chuck Jones, but as if they became infatuated by loops and architectural planar surfaces.

However this artist is rapidly changing. You can see Bennett’s development from the earlier works that got shown initially at Vavasour Godkin about three years ago. His images are much richer now with a more varied range of allusions. There seems to be more weight to the nuances of composition and movement - plus a knowing theatricality that really exploits a big screen projection.

Such entertaining and hypnotic images deserve exposure to large audiences in outdoor public spaces downtown. They have a kind of visual ‘musicality’that is like the Keystone Cops or Len Lye without sound. I think their stagey settings, motion and humour would have immense appeal for a huge number of viewers - far beyond the normal art world circuit of municipal institutions and dealer galleries.

There are some great images here. However many of the arrayed figures look a bit too much like the first ...

There are some great images here. However many of the arrayed figures look a bit too much like the first 3D art animations I saw 15 years ago…now considered fairly simplistic and well-trodden territory. I think other lesser known, marginalized NZ 3d animation innovators such as Marcus Williams and collaborator, Susan Jowsey ; and Brit Bunkley (who has been working in this area for nearly 2 decades) have arrived at more creative and contemporary results.