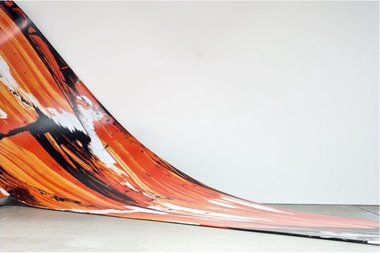 Like her predecessors et al, Michael Stevenson and Peter Robinson, Venice has brought her work to the attention of international curators, collectors and writers. That's why this exhibition with Hamish Morrison is so important: it's her first chance to confirm that Venice wasn't a one-off, and that she really does belong on a big stage.

Every year, Berlin’s galleries team up to coordinate Gallery Weekend: three days of openings that attract curators, critics and collectors from all over Europe. This year, people flew in for what promised to be a pretty exciting few days. There was a buzz about the fact that some of the biggest names in the art world were having shows in the city: people queued almost round the clock to get into the new Olafur Eliasson show; and out on Heidestrasse, crowds gathered outside Damien Hirst’s opening, trying to get a peek at some of the works he didn’t sell at his Sotheby’s auction in September 2008. Other big names, though not quite as stratospheric, were also opening around town: Gursky, Wallinger, Bonvicini and Peyton among them.

In the middle of all this hype (and right next to Hirst’s exhibition), Judy Millar opened at Hamish Morrison Galerie. Millar’s show, A Better Life, is her first major installation since representing New Zealand at Venice last year. As with Venice, she hasn’t backed away from either the high-profile context or the size of the space she’s been given: it’s an all-or-nothing project, for an all-or-nothing weekend.

Extending the concerns of her Venice show, giant strips of billboard material printed with her blown-up marks collapse over each other and spill through the gallery. There’s more colour than at Venice. Complex negative curves make the piece more dynamic too, and there’s a sharper interplay between form and content. In the past, I’ve written that at ten times their actual size, her marks become graphic rather than expressive. But here she’s managed to make them architectural too, designing them to follow the curves of the structures that support them. She’s also resisted the temptation to put too many paintings on the walls, so there’s nothing to distract viewers from the main event; as one artist said to me at the opening, the work is like a single breath through the gallery.

I’ve worked with Millar many times before: so people can take or leave the fact that I think it’s a great exhibition. The more important issue is what it represents for her career. It’s no secret that the New Zealand art world has had an uneasy relationship both with her international rise and with her work for a while now. I think this is caused by three factors. First, her work demands time, and a lot of people either don’t want to, or don’t think they need to, give it the extended attention it asks for. Second, there’s a fixation with the idea that her work is primarily about abstraction, which it isn’t, and it’s therefore written off as decorative and out-of-date. Third, and perhaps most importantly, it looks out from New Zealand rather than in, participating in a global conversation about the relationship that painting has with the real world it both seeks to represent and be a part of. While there aren’t many artists in New Zealand exploring similar ideas, there are plenty of very good ones around the world who are: Katharina Grosse, Sterling Ruby, Arturo Herrera, Thomas Scheibitz and Richard Wright, to name a few. I’m not suggesting that these artists have exactly the same motivations as Millar, but there are parallels.

The fact that Millar is now participating in this conversation points to her own determination to be part of it. But it also says something about the platform that Venice has given her. Like her predecessors et al, Michael Stevenson and Peter Robinson, Venice has brought her work to the attention of international curators, collectors and writers. That’s why this exhibition with Hamish Morrison is so important: it’s her first chance to confirm that Venice wasn’t a one-off, and that she really does belong on a big stage.

There’s also a lot riding on the show for the gallery. Expatriate New Zealander Morrison was one of the first gallerists to move to Heidestrasse, which is now one of Berlin’s most important gallery strips. Over the past few years, he’s built up a diverse stable of artists including: Iceland’s Gabriela Fridriksdottir (also a Venice veteran); The Netherlands’ Ronald de Bloeme; Dresden-based painter Paul Pretzer; Britain’s Andrew Cranston; Australia’s Mikala Dwyer; and Millar. Morrison has taken a leap of faith by giving Millar the Gallery Weekend gig - one of the two most important slots in Berlin’s art calendar (the other is the start of the gallery season in September, which he’s given to Dwyer). But if reaction at the opening is anything to go by, the gamble is paying off.

Morrison, and Millar’s other dealers Mark Müller (Zurich) and Gow Langsford (Auckland), will all have been perfectly aware that once Venice was over it was up to them to push the artist’s career forward. This raises a challenging question for CNZ though, about who benefits most from their massive investment in the bi-annual event. Obviously the artists do well out of it. Their dealers do too: Venice, for any artist from any country, still serves as a quality-mark for collectors. However, there might still be questions about the value it creates for New Zealand; the old ‘home or away’ debate that causes CNZ - and New Zealand artists based overseas - endless amounts of grief. The anachronistic ‘national’ structure of Venice doesn’t help. But the harsh truth is, this national angle doesn’t really matter much any more. In a global art world, there’s nothing inherently interesting about an artist being from New Zealand: it only becomes interesting when that artist harnesses their point of cultural difference to make work that contributes in a worthwhile way to international conversations. This is exactly what Millar has done, and what et al, Stevenson and Robinson did before her.

Millar’s show with Hamish Morrison then, is exactly the sort of thing that CNZ should be pointing to as a positive outcome from their investment in Venice. A Better Life, and the results that will likely come from it - museum shows, big collections, residencies - illustrate that there is life after Venice for New Zealand artists, even if that life doesn’t play itself out at home.

Images courtesy of the artist and Hamish Morrison Gallerie