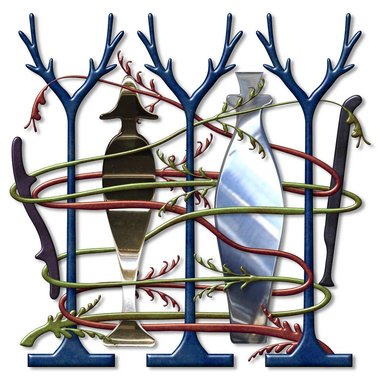 Sometimes it leads to fresh, unexpected surprises; on other occasions he seems too preoccupied with his own umbilicus, and the work (for Killeen - one of the indisputably great NZ artists of the seventies and eighties) becomes disappointingly tired.

Richard Killeen
The Presence of Objects

This quite large show of Richard Killeen’s digitally inked paper prints and larger canvas ‘paintings’, occupies both ends of the Ivan Anthony Gallery. These ‘objects’ reference many parts of his very varied career, particularly his earlier cut-outs, those silhouetted single-coloured shapes (1978-81) designed to be hung side by side within compositionally arranged groups created by the exhibition hanger.

With these recycled images now being fixed in position within portable rectangles - juxtaposed, overlaid or sometimes bodily interwoven - the metallic looking, computer-rendered forms look as if they have been made with an airbrush. Gone are the flat monochromatic primary or black hues: these have a sheen and are often mottled. Absent also are the thin, perpendicular in cross-section, edges of each shape. The drawn contours curve over into the top plane like a sanded bevel, and accentuate the shapes’ highly ornamental properties as animals, utensils or plants, with painted highlights added. They look like decals found on heavy industrial machinery.

The shapes thus are softly rounded, with no spiky geometry or threatening sharp edges - and are always accompanied by fuzzy shadows so that they have a thickness. The shallow tray-like space, because it references the wall on which the cut-outs were hung, though illusionist, is a vaguely modernist picture plane that repudiates the depth of his other digital, more densely packed and highly decorative images.

The hermetic reflexivity of Killeen’s practice has been going on for some time now, going round and round, spiralling in on itself. Sometimes it leads to fresh, unexpected surprises; on other occasions he seems too preoccupied with his own umbilicus, and the work (for Killeen - one of the indisputably great NZ artists of the seventies and eighties) becomes disappointingly tired.

Here you can see the artist’s mind ticking over with new spatial and stylistic treatments of his image-bank but the constant revamping is now becoming lacklustre. I visited this show with excited anticipation, because Killeen is an artist with an exceptionally interesting painting history, and he of course knows he has that drawing power. However there are signs within this self-referential exhibition that the work is getting jaded, too conceptually repetitive. He needs to escape from his standard now over-utilised repertoire, take a holiday, and start reinventing.