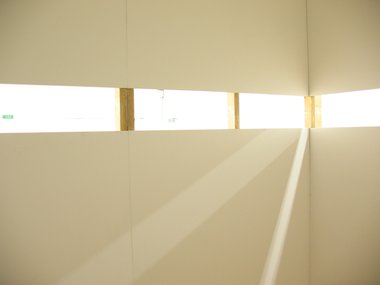 Of course Akehurst is being ironic - how could it be otherwise - but by stripping it of its collaborative trappings it seems about as much of an experience as the Orana Park giraffe feeding platform without the giraffes.

Some ideas, like Freddy Kruger, shoulder pads or a dodgy curry, just seem to keep coming back again and again. GalleryGallery is a portable scaled down 2.4x1.6m white cube conceived as a guerrilla (a word that sets my teeth on edge) intervention by Christchurch artist Matt Akehurst. Since March 2009 GalleryGallery has been popping up around the South Island like a mushroom, hosting a number of (mostly student) artists in its mock mini gallery, and even poetry readings and live music performances.

The project has been something of a mixed bag; some engagements have been witty and engaging, while others have seemed little more than half-arsed opportunism. My personal favourite deployment was OpeningOpening at the University of Canterbury School of Fine Arts where for opening night it became a bar (and let’s face it, isn’t that the main reason two thirds of people go to gallery openings anyway?) but I have to say that it’s concluding incarnation GalleryGallery-Gallery at Christchurch’s SOFA Gallery left me rather cold.

The gallery space is abruptly curtailed by a nicely joined wall and short flight of stairs. The door leads to GalleryGallery itself, which overlooks the now hermetically blocked off gallery space like a duck hide or a tree house - or perhaps even the Seraglio of the Ottoman sultans. The lights go on… And the lights go off… Like the famous Martin Creed work played at half speed and just as ephemeral. On. Off. On. Off. I think they used to do similar things to prisoners at Guantanamo Bay.

To be fair, it is beautifully constructed with a very nice wooden floor, and should Akehurst ever grow weary of being a struggling artist he can always fall back on carpentry, but the idea of ‘guerrilla gallery interventions’ into the white cube is hardly a new one and back in the 1970s when it was fashionable to equate being successful to selling out it was pretty much done to death. Every generation of students seems to feel the need to raise the floor, move the walls around or build partitions. Even the idea of a portable container that can be transported around as an ad hoc venue, whether it be called a pod, a capsule, a kiosk or whatever, has been the staple of Arts Festivals, Biennials and Triennials for decades.

Even back in 2002 when Maurizio Cattelan unleashed The Wrong Gallery on New York, and later Sergei Jensen’s Waiting Room in Berlin, 2006, the concept was getting a little tired. One can also talk about artists like Daniela Brahm, Markus Draper, Anton Henning, and that’s just Germany. It may even ultimately go back to the sort of enclosures Joseph Beuys used to fashion in gallery spaces in order to act like a bit of a side show twat with a coyote. Unless you are a claustrophobe, there is a womb-like security in such odd little hermitages - something we learn the first time we made a tent by throwing a sheet over two chairs as a child.

Of course Akehurst is being ironic - how could it be otherwise - but by stripping it of its collaborative trappings it seems about as much of an experience as the Orana Park giraffe feeding platform without the giraffes. An empty gallery is not really much of a metaphor in a context where Marcel Duchamp had been playing around with similar ideas a century earlier. Meta-meta-art goes off quicker than milk that’s been left out of the fridge overnight.

So, if you know something about the history post-modernist art, you feel a little blasé. If you are a tourist off the street who doesn’t know what the gallery looks like in the first place it is somewhat meaningless. If you don’t know anything about the history of these kinds of interventions, you are not going to get the irony of the references. It feels something of a letdown after an entertaining journey.

Or perhaps it is an appropriately poignant and elegiac retirement of a worn-out warhorse, and I salute it. As one might imagine, in that reduced space opening night was like the Black Hole of Calcutta.