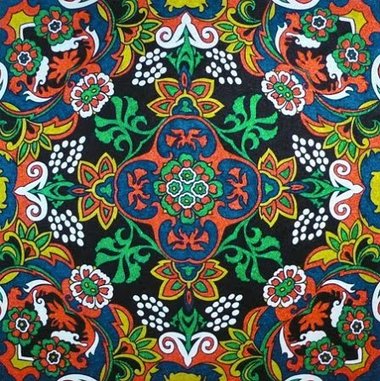 While it is indisputable that our culture is indeed homophobic, making a connection between the murdered victims of gay bashing and these animal portraits is bizarre - to put it kindly.

The ten glitter paintings by Reuben Paterson currently on show at Gow Langsford feature several portraits of big cats such as lions, tigers and panthers - along with some carpet-like square paintings and the occasional design loaded with floral motifs.

With the glitter as a ‘queer ‘signifier one would assume this references homo horniness, more than hetero. They celebrate the frenzied bodily frictions of same sex carnality. Danger and violence, by implication, is part of that.

That is of course if you emphasise the titles. Otherwise the works are just technically accomplished feline portraits, pitched to those who love the big ferocious carnivores of Africa or India. And maybe the tropes in the titles are a bit heavy-handed.

Certainly in the Gow Langsford statement for the show the claim that “Paterson views these works, in part, as a personal homage to the victims of murder cases which have successfully used the provocation or “gay panic” defense. The work suggests that in the same way that we have an underlying culture of racism, there is also an underlying culture of homophobia.”

Paterson, on radio for example, is normally an immensely gifted artist interviewee - one extremely eloquent and articulate. Here though, we have the worst kind of inane motor-mouthed rhetoric. While it is indisputable that our culture is indeed homophobic, making a connection between the murdered victims of gay bashing and these animal portraits is bizarre - to put it kindly. The signals are very confusing - almost a celebration of homophobic violence rather than a condemnation.

With a title of Dear Beauty, Dear Beast, go figure.