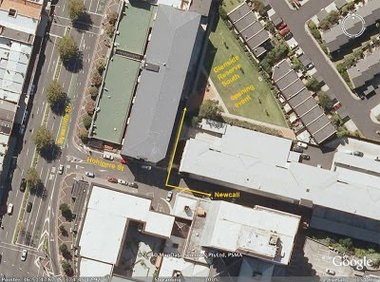 …but if an artist like William offers me a crunchy sugar-coated doughnut and there's some lemon juice I can taste that reminds me, say, of my father's pancakes, then there is a bodily experience I can remember…

This is one of those projects which eschews displayed objects on a gallery wall or floor in favour of verbally transmitted information discovered through fastidious research. It showcases historical narratives that revolve around the communities located near to the Newton gallery site and uses social occasions to generate conversation that might be added to the growing pool of knowledge.

To this end Hsu and Spratt organised series of events, each of which involved a retelling of some aspect of the Newcall site’s local history.

The first was a picnic that replaced an orthodox gallery opening, held in a small triangular park, Glenside Reserve South, very close to the gallery. The park is a site most Aucklanders would be unaware of. It is surrounded on two sides by two high-rise apartment blocks. Spratt and Hsu sent out a letter to the residents asking them to come down and share sandwiches, and to place a pot plant in the centre of their private, but easily seen, balconies. Some of the recipients were indeed sufficiently intrigued by the strange missive to put out a plant and join in the soirée. Photographs of that picnic can be seen above.

The next event was a dinner held in the nearby St. David church hall for Newcall artists and friends, where Spratt and Hsu elaborated on their research, briefed some of the Newcall artists on their explanations to visitors to the empty gallery during the show, and where food prepared by various Basque cooking societies was served.

The connection to the latter activity became more apparent in the third event, a cycle tour that left another nearby park, Basque Road Reserve, and - looking at garden sites - moved along a cycle track besides the North Western Motorway, through Kingsland and out towards Mount Albert. Basque Park was famous for its Community Garden, an activity that became an inspiration for other smaller horticultural activities in the greater Auckland region.

Event number 4 was another picnic, on the top of the car park built on the corner of Khyber Pass Road and Burleigh Street. Apparently one community group used to meet monthly at Glenside Reserve South, park their cars here and bring doughnuts - so doughnuts and ginger beer were delicacies provided for the dozen guests (like myself) who turned up. Hsu and Spratt spoke at length of the social contributions made by the different church communities in the locality, such as St. David, St. Benedict’s, The Church of the Holy Sepulchre, and the City Mission.

Apparently there is one more event planned in this series, even though the gallery is now about to have a new exhibition installed. The space has served its purpose, as a kind of hub from which investigative sorties can emerge.

This sort of project, with its keen interest in local history, is related to other performances I’ve attended - like those by Louise Menzies, or Raised by Wolves - that have been also driven by historical research. It’s a genre that here has a relational component added where it is less a lecture and more a bit of a friendly chat over food. It was a lecture but without the distance between performers and audience. An informal talk within a group rather than at it.

Myself, I’m not that big on history, except if I happen to be hooked by a film or novel some friend has pressed upon me. I’m not big on food preparation either, but if an artist like William offers me a crunchy sugar-coated doughnut and there’s some lemon juice I can taste that reminds me, say, of my father’s pancakes, then there is a bodily experience I can remember, and - as a comparative newcomer to Auckland who lives in neighbouring Kingsland - also an opportunity to grasp some of the design and historical context of buildings and landscaping I walk past nearly every day.