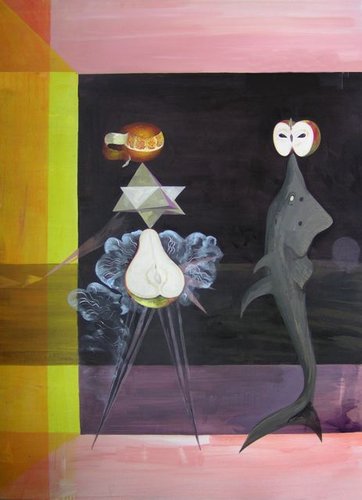 Hooper’s images are very knowing in their eclecticism. They expect you to spot the references, for the hybridity is deliberately not hidden under the mantle of a newly absorbed ‘originality.’ They flaunt their art historical origins openly.

The six Julian Hooper paintings and one drawing shown in the K’ Rd end of the Ivan Anthony premises develop his interest in Surrealism in a more pronounced way than previously – when his method was pitched slightly differently: maybe now they seem an even more quirky version of Archimboldo. As before (as in his ‘K’ Rd’ section last year) these are all portraits. Some large canvases this time.

Usually these standing figures are made up of marine life and fruit: catfish or flying fish balanced vertically on their tails, with split apples or unraveling, peeled oranges or empty seashells balanced precariously on their snouts. The dominant mood is that of Max Ernst, but the references often include Miro, Dali and Magritte.

Sometimes the portraits are a different combination, using decorative motifs of church architecture and voluminous, brightly patterned, peasant dresses. The images seem to be satirical when considered collectively, as if an attack on pomposity but also gender clichés. The men are rendered as rigid and wooden, the women as soft flowing, undulating forms of fabric.

Hooper’s images are very knowing in their eclecticism. They expect you to spot the references, for the hybridity is deliberately not hidden under the mantle of a newly absorbed ‘originality.’ They flaunt their art historical origins openly.

Whether there are metaphoric tropes intended with the rendered objects is another question. Is there a precise Renaissance type of symbolism involved with say the fruit and fish? That seems implausible. More likely they have been chosen for the simplest of reasons - that fish make nice long supple bodies, and fruit make good heads. And that they entertain with their celebration of artifice mixed in with poetic resonance.

There could also be an underpinning, sharply dualist, interpretation going on here - that the contemplative mind (i.e. the exposed fruit-head) is sweet and juicy but the aging or unwashed (fishy) body is repulsive and smelly. Probably though the reasons are morphological, just the pleasures of shape alone, rather than bearing a specific message.

Hooper’s paintings are getting more decisive and confident with their compositional placement and scale now. Yet they have a looseness and lack of spatial density that is an intriguing foil for the Saskia Leek show further up the corridor. If you are the same as me and a bit of a sucker for Surrealism, you’ll like this show.