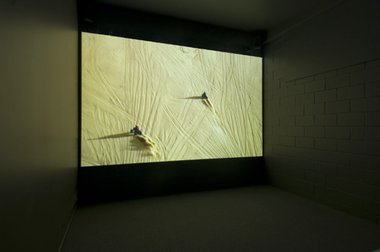 Though an obvious reference to the transience of existence, her fleeting portraits and figures also alluded to the fortunes of the planet, grim augurs for our species' future.

Monteith had the advantage of having the video room out the back all to herself, showing a work previously seen at St. Paul St of different Moto-X riders making tracks up and down a huge dune at Ahipara - as if it were a massive sheet of finely grained drawing paper. With Monteith the whining crackling staccato of the engines was a big component of the pleasure (and humour) she provided, along with three quarter angle photography that could almost be aerial.

Gregory Bennett’s animated films often seem to illustrate some futuristic theme where solitary individuals no longer exist, humans being only capable of moving in unison - like ants that share a common mind. His recent work is now more concerned with simple geometry than it was previously when it was more narrative-based. Densely packed rings of humanoids move their limbs and torsos in co-ordinated unison, opening and closing, like an awakening bud. Bennett is really a choreographer of digital dance, a designer of beautiful (but simple) communal actions.

Clinton Watkins’ slow moving loops of a galloping horse and swinging light shade hypnotically caressed your retinas, while teasing you into searching for the minute jump where each cycle restarted. The gentle pulse from the rocking light, and the flickering space between flailing equine limbs and distant background, held your interest - keeping you from leaving.

Judy Darragh’s video of 365 daily ‘Rorschach tests’ of symmetrically patterned, coloured ink drawings, were a little like Julia Morison’s erotic ink folds (seen in the second most recent Auckland Triennial) but less vaginal and more like butterflies. They had a horizontal, not vertical, format, and were made after giving birth to a child. Darragh’s metaphor of a butterfly thus seemed appropriate. The light of these delicately transparent drawings became particularly intense when enlarged and converted to video, causing the chromatic saturation of the ink to seem to fade. It was a clever idea to put them in a slowly morphing sequence.

The theme of metamorphosis was also apparent in Polish artist Dorota Mytych’s spectacular videos of images made of tea leaves. These, after a stationary period, then became scattered as if blown by a large fan. Though an obvious reference to the transience of existence, her fleeting portraits and figures also alluded to the fortunes of the planet, grim augurs for our species’ future.